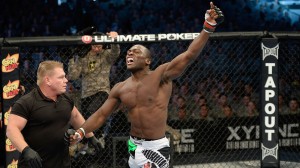 After many commercials and time to kill, Lorenz Larkin and Derek Brunson capped off the preliminary fights of UFC 177. Larkin was trying to avoid his third loss in a row and Brunson trying not to drop back to back fights.

The first round had Larkin looking sharp on his feet early. He was able to snap off a few kicks and land some shots but Brunson pressed Lorenz against the cage and started to work his game plan. The fight looked to over when Brunson locked in a tight guillotine that had Larkin in bad shape. Brunson let it go but swarmed Larkin on the ground for the majority of the round.

Larkin started the second round snapping a powerful body shot but found himself right back in the same position as he had been minutes earlier. Brunson was dominant on the ground and was also sneaking in shot after shot earning points on the judges score cards. With a little over a minute to go Larkin was back to his feet but only had a short time to work as he was taken right back down. Brunson stayed in control to close out the round.

Deja vu for round 3. Larkin snapped a kick and avoided an early takedown but Brunson came back and dropped him. A graphic flashed saying that Brunson had landed over 60 ground strikes to only five of Larkin. It was smooth sailing for Brunson until about 20 seconds left of the round but it was too little too late for Larkin.

The judges saw it 30-27 across the board for Derek Brunson. Brunson is back in the winner’s column and Larkin moves to 1-3 inside the octagon.

The pay per view is going live and if you can’t watch make sure to follow along here.