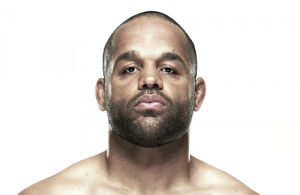 Anthony Hamilton and Ruan Potts was an interesting bout and served as the second bout of the night. The heavyweights didn’t exactly come out and woo the crowd but it was a solid performance for the former Maximum Fighting Championship title holder Hamilton.

The first five minutes was all Hamilton as he was able to get Potts down at will. There were some odd times when we didn’t know if Potts was going to get up, stay down or what. Hamilton has strong wrestling but has always been dangerous on his feet. Early in the round Potts was dumped on his head and that could have been a game changer but Potts came out for the second round. Maybe he should have stayed in his corner.

The second stanza was a tale of body shots. Hamilton battered the rib cage of Potts with shot after shot. The referee  begged Potts on a few occasions to fight back but he was unable to do much of anything. With less than a minute to go I think everyone had seen enough and the fight was stopped.

Hamilton gets his first UFC win as Potts drops his second in a row after starting his career 8-0.

Stay up to date on all things UFC 177 by clicking here.