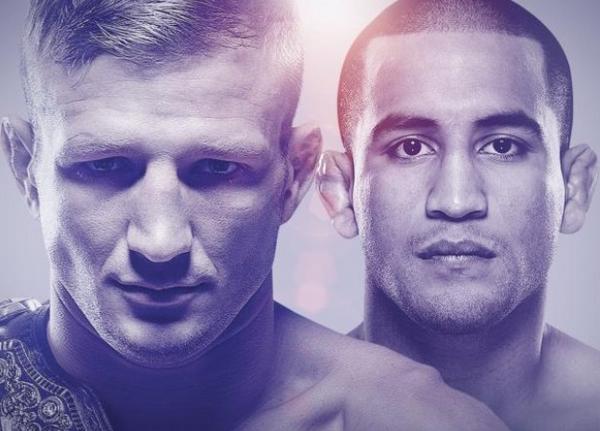 UFC 177 takes place this evening at Sleep Train Arena in Sacramento, Calif., and features a bantamweight title fight between champ TJ Dillashaw and challenger Joe Soto. This is Soto’s UFC debut, and yes, he’s getting an immediate title shot because Dillashaw’s original opponent, Renan Barao, was forced off the card on Friday due to health concerns while trying to make weight.

Also on the card is a lightweight match-up between Team Alpha Male’s Danny Castillo and TUF 13 winner Tony Ferguson. And Bethe Correia tries to knock off another one of the Four Horsewomen as she takes on fellow bantamweight Shayna Baszler.

The three-fight prelim card kicks off at 8 p.m. ET on FOX Sports 1, with the PPV main card starting at 10 p.m. ET. ProMMAnow.com will provide LIVE results and round-by-round updates throughout the event.

Round 1 – Wade with an early takedown, in side mount. Carrizosa trying to stand but Wade drags him back down, locks up a guillotine, rolls to mount and Carrizosa goes to sleep. Great UFC debut for Chris Wade.

Chris Wade grabbing that Pat Curran special guillotine on Cain Carrizosa. Very sassy finish from a guy who has traditionally been a grinder.

Round 1 – Clinch takedown from Hamilton, lands in side mount. Potts gets to his feet. Nice right from Potts. Hamilton presses him to the cage. Potts tries a trip but ends up on his back. Hamilton lets him up. Potts ducks into a kick, then eats a right. Hamilton catches a kick and dumps Potts on his back. Hamilton stands, lets Potts up. Potts comes in swinging but Hamilton ducks and puts him down again. Then lets him up. Potts lands a couple shots in the clinch before the bell. PMN scores the round 10-9 for Hamilton.

Round 2 – Hamilton presses Potts to the cage, lands some strikes, then takes him down. Lets Potts up. Potts with a leg kick but gets put on his back. Hamilton on top in half guard. Big body shots from Hamilton, over and over in the same spot. Potts is unable to move from this half guard position and Hamilton continues the assault. Ref tells Potts to move, he finally does, but his ribs look horribly bruised. Ref keeps telling him to defend himself. He does not. The fight is stopped.

Round 1 – Right and a knee from Larkin, stuffing Brunson’s takedown attempt. Body kick from Brunson. Bigger body kick from Larkin, followed by a right hand. Brunson comes back swinging, looking for the takedown. Brunson looking for a body lock takedown. Knee to the body from Brunson, drops for a single leg attempt, lets it go, lands a nice left. He locks on a guillotine and takes Larkin down, lets go the guillotine. Larkin gives up his back as Brunson stays on him landing punches. Brunson on top in half guard. Larkin gets full guard, landing some elbows off his back. Larkin looking for the gogoplata but Brunson escapes. PMN scores the round 10-9 for Brunson.

Round 3 – Big right kick to the body from Larkin. Brunson shoots, stuffed. Left hook from Larkin, but Brunson gets a body lock, then a trip takedown. Takes top control in half guard. Brunson controlling, but not doing any damage. Larkin gets to his feet with about 20 seconds left. He knows he needs a KO but is unable to deliver. PMN scores the round 10-9 for Brunson and the fight 30-27 for Brunson.

Round 1 – Jackson trying to close the distance but gets tagged by Medeiros. Jackson comes in again, lands two right hands as he initiates the clinch. Turning each other around against the cage, landing knees. Time called after Jackson takes a low knee. Nice jab, then a left uppercut from Medeiros. Nate Diaz in his corner. Jackson pressing him to the cage in the clinch, Medeiros goes for a guillotine but Jackson escapes. They trade shots and Medeiros lands a nice left. PMN scores the round 10-9 for Medeiros.

Round 2 – Leg kick from Jackson. Head kick and Medeiros smiles. Then lands a left hook to the body. Jackson shoots, stuffed. Pressing Medeiros to the cage, looking for the single. This gives Medeiros opportunity to lock on a choke, cranks it and Jackson goes to sleep. Night night.

Round 1 – Ramsey comes out punching. Ferreira also scores. Ramsey catches a leg and tosses Ferreira to the ground, lets him up. Front kick from Ramsey, then leg kick. Left hook from Nijem. Ramsey catches another kick and dumps Ferreira. He gets right up and they exchange a punch combo. Ramsey fires off more shots that stun Ferreira, but he seems okay. Nice exchange, Nijem eats a left hook, then puts Ferreira on his back. Ferreira threatens and Nijem escapes to his feet. Ferreira stays on him, rocks him with a punch. Nijem with the takedown but Ferreira sweeps him and is looking for the submission. Nijem escapes to top position. Ferreira attacks a leg, Nijem escapes but takes some body shot before the bell. PMN scores the round 10-9 Ferreira.

Round 2 – Leg kick from Nijem. He gets tagged with a big right and he immediately shoots for a leg. Ferreira locks up a guillotine, but Ramsey survives. Nijem working the ground and pound from full guard now. He stands and lets Ferreira up. Nijem gets dropped with a right as he rushes in. He’s hurt badly. Ferreira finishes him off and Ramsey doesn’t even know what happened when it’s all over. Ferreira improves to 11-0.

Round 1 – Baszler clinches and presses Correia to the cage. Thai plum and knee from Baszler but she ends up on her back with Correia inside full guard. Baszler looking for the armbar. Correia escapes to her feet. Right hand from Baszler, clinches, presses Correia to the cage. Looking for the single now. Correia turns her to the cage. Uppercut from Correia as Baszler shoots in for the single. Correia escapes, lands some hammerfistst. Baszler now on top in half guard, looking for a guillotine as time runs out. PMN scores the round 10-9 for Baszler.

Round 2 – Trading punches, they clinch up, Correia landing nice elbows and punches as Baszler looks hurt with her back to the cage, she’s fading. Correia teeing off on her with a barrage of punches. Baszler can barely lift her arms and she’s not moving. Correira continues the assault with body and head shots. Finally, referee Big John McCarthy has seen enough and stops the battering. Bethe calls out champ Ronda Rousey after the fight. After all, Bethe has beat the only other two of the 4 Horsewomen in the UFC.

Bethe is using hand signals to now indicate she wants to face Rousey, wants the belt. The Last Horsewoman has no choice but to duel.

Do I think Correia survives one round with Rousey? Noooope. Will I still watch it, just to see Angry Ronda Face? Yeppppp.

Round 2 – Body kick from Ferguson. Castillo with a nice punch combo. He shoots, stuffed. Left counter from Castillo. Big inside leg kick from Ferguson, again. Ferguson stalking, eats a big right. Nice right left combo from Castillo, couple left hook counters. Knee from Ferguson, jab from Castillo. Ferguson rolls for a leglock but ends up on his back with Castillo on top in half guard. Ferguson sweeps to full mount, but Castillo reverses, gets caught in a guillotine, but escapes. Ferguson with elbows off his back, Castillo inside full guard. Crowd chants “Danny”. But he’s not doing anything at the moment. Ferguson landing shots off his back. Ferguson trying to get to his feet, but Castillo holding him down. PMN scores the round 10-9 Ferguson.

Round 3 – Leg kick from Ferguson. He rolls for a kneebar, now looking for a kimura. Castillo escapes and Ferguson is back to his feet for a moment, Castillo drags him back down. Ferguson up, Castillo picks him up and puts him down again, inside his full guard, passes to half. Castillo holding him down here, Ferguson recovers full guard. Ferguson throwing elbows off his back. Castillo is able to get to full mount briefly. Castillo locks on an arm triangle a few seconds before the bell. PMN scores the round 10-9 for Castillo, but the fight 29-28 for Ferguson. Castillo was perplexed at the judging, saying “I controlled a grown man.”

Tony did all the work on the ground and Danny tried to just hold him down.

Round 1 – TJ already showing that Dominic Cruz-esque footwork. Leg kick knocks Soto down. TJ lands a nice right, it goes to the ground and TJ hops on his back. Soto gets to his feet and escapes. Soto ducks a head kick. Right hand from TJ. Soto counters with a left hook. Left hook from Soto again. Right hook this time. Leg kick from TJ, left to the body. Big right hook from TJ. Leg kick from Soto drops TJ for a split second. They slug it out before the bell. PMN scores the round 10-9 for TJ Dillashaw. Good action!

Round 2 – Soto landing some nice right hands, countering TJ’s aggressiveness. Soto’s confidence seems to be growing. Leg kick from TJ, again. Uppercut from TJ connects. Right hook from TJ. Left hook from Soto. TJ being far busier with his strikes this round. He’s calmed down some too. Soto’s pace slowed way down. Adrenaline dump perhaps. Leg kick Soto. Nice jab from Soto after showing some good defense during a flurry from TJ. Nice jab from Soto. PMN scores the round 10-9 for Dillashaw.

Round 3 – Leg kick from TJ. Leg kick from Soto. Body kick and a right hand from TJ. TJ being very busy with the punch combinations. Not a lot of heat on them but he’s scoring a la Diaz boys. Leg kick from TJ. Soto shoots for a single, stuffed. After landing several punches, TJ puts Soto on his back for the first time. Soto scrambles to his feet. Soto already looks defeated. His body language looks beaten. Nice punch combo from TJ. Jab from Soto. Head kick from TJ. PMN scores it 10-9 for TJ. Starting to look a bit like a sparring match.

Round 4 – Soto stalking now. TJ flashing jabs and punches. Leg kick. After some pitter-patter boxing TJ scores a takedown. Soto with mission control, now full guard. He scrambles to his feet. Not a lot to talk about his round, and frankly it’s getting a bit boring. PMN scores the round 10-9 for TJ.

Round 5 – I think a lot of people would expect the UFC champ to finish a guy making his UFC debut, right? But, it’s not quite that black and white. Soto is an experienced and accomplished veteran. TJ with a head kick and punches. Soto bleeding. He looks for the takedown, stuffed. TJ motions to the crowd for cheers. TJ wobbles Soto with a head kick, and lands a big left that drops Soto. That’s it folks. Stoppage in the 5th. That’s what people would expect. Job well done Mr. Dillashaw.

Massive respect to soto. Did very well against the champion. Look forward to seeing him in the @ufc

And the final verdict on the fight card? This guy sums it up nicely:

Ended up being a good night of fights. I have no regrets about buying it. #UFC177