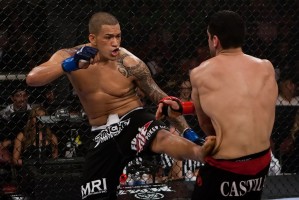 Damon Jackson stepped up on short notice to fight Yancy Medieros and the two kicked off the pay per view portion of UFC 177. Medieros has had a weird UFC journey so far and was looking to get his first actual win. Jackson came in undefeated looking to make an impression.

The first round saw Medieros use crisp striking and strong takedown defense. Jackson didn’t seem phased by the rumored UFC jitters though, he locked horns with Yancy on several occasions trying to halt the strong offensive attack. There wasn’t much damage but Medieros was in good position going into the second.

It was all Medieros in the second round. Jackson seemed to be frustrated trying to get something going but he couldn’t. Jackson rushed in for a takedown and left his neck open to a guillotine. Medeiros took the neck but Jackson tried to spin out and was caught in a weird position described as a reverse guillotine/bulldog choke. Whatever it was put Jackson to sleep.

Medeiros gets his first official UFC win with a strong performance and also takes home a Harley-Davidson. A good night for the Hawaiian.

Stay up to date with all things UFC 177 right here.