Amanda Nunes says Rousey lucky in Davis win, “She’ll give up” against her 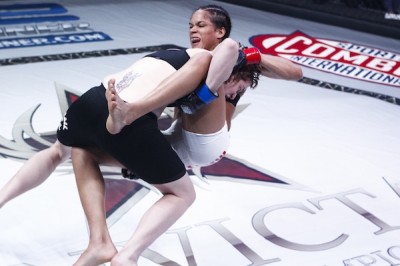 “I’m  not impressed by your performance” – GSP to Matt Hughes during Hughes’s post fight interview at UFC 63 shortly after Matt Hughes finished BJ Penn in the 3rd round.

That was one of the most epic moments and it happened just when the UFC was really taking off. A lot of people have done impressions, bad ones, of that quote. It isn’t the first time trash was talked nor will it be the last. There have been many bold statements since then, but this may be the boldest in recent memory. Suprisingly it comes from Cat Zingano’s next opponent, Amanda Nunes.

Amanda Nunes, just like GSP, was not impressed with Rousey’s performance against Alexis Davis. The top 10 135-pound fighter told FOX Sports that Ronda Rousey simply got “lucky” and then went on to proclaim that the movie star’s striking is well, “not very good.”

“This is the main thing: After this fight I think the UFC will give me the opportunity. After I beat Cat Zingano in this fight, I want to prove in this fight that I’m ready for Ronda. Her striking is not very good. She knocked Alexis Davis out because she was lucky. I think she’s very good with her Judo throws and everything, but I’m ready for that. After this fight for sure I’ll start training for Ronda. If she comes to strike or if she goes on the ground, I can beat Ronda, too. I think keeping distance from her and don’t give her the opportunity to grab you. If you punch her very hard, she’ll give up. Move back and forth and throw a punch. By the end of the second round, she won’t have enough to keep it going and that’s my strategy and I’ll beat Ronda Rousey.”

Nunes has to get past Cat Zingano who is one of the best in the world no question. Zingano is coming back after a long layoff due to injury, and the mental effects of the tragic death of her husband, Brazilian Jiu-Jitsu black belt Mauricio Zingano.

Cat Zingano returns against Amanda Nunes at UFC 178. Has she fully recovered mentally and physically? What do you the readers think?