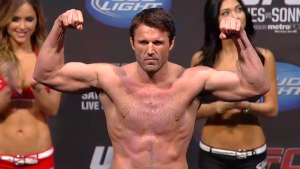 We reported that former UFC middleweight contender Chael Sonnen failed a drug test a couple of weeks ago, testing positive for anastrozole and clomiphene. However, Sonnen is back in the news again for another failed drug test according to MMAFighting.com’s Ariel Helwani:

Chael Sonnen tested positive for four banned substances earlier this month in a second random drug test administered by the Nevada Athletic Commission. Sonnen, who recently announced his retirement from MMA, was asked to take a blood and urine test on June 5 in Portland, Ore., by the NAC because at the time he was scheduled to fight at UFC 175 on July 5 in Las Vegas. The commission learned earlier this week that Sonnen failed those tests due to the presence of human growth hormone (HGH), recombinant human erythropoietin (EPO), which is typically used to boost red blood cells that carry oxygen to the muscles, increasing stamina and endurance, anastrozole, used to treat early stages of breast cancer, and human chorionic gonadotropin (hCG), the female fertility drug that is often used in an effort to restart testosterone production.

Sonnen explained why he failed the initial test, citing the drugs he tested positive for were needed as he transitioned off testosterone replacement therapy. However, his response to MMAFighting regarding the second failed test is below:

“Yes, the Commission is aware of other prescribed medications I was taking and I will not challenge their allegations. I will cooperate with the Commission and look forward to having a dialogue about how fighters who transition off TRT can avoid violating any rules.”

Wow!  Sonnen is expected to compete the upcoming Metamoris grappling tournament against Andre Galvao on August 9 in Los Angeles. Stay tuned to ProMMAnow.com for more news on this situation.