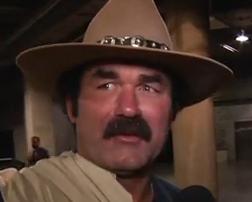 Don Frye is a legend – he is also a bit crazy. Frye is known for an aggressive style, professional wrestling build, and one hell of a mustache. Don Frye once asked God, “Bro do you even lift?” Okay so we made that up completely but still though, he probably said that. Don is a fan favorite, a controversy magnet, and an all around tough guy rolled in to one hairy Magnum P.I. clone. We take a look at some of the craziest things he has said recently in this slideshow.

The source for these awesome quotes can be found at the awesome Women’s MMA website at the following link:

Donald “Don” Frye (born November 23, 1965) is an American former mixed martial artist, professional wrestler and actor. In MMA he was one of the sport’s earliest well-rounded fighters and he had instant success, winning the UFC 8 and Ultimate Ultimate 96 tournaments and finishing as runner-up at UFC 10 in his first year of competition.

Despite his accomplishments, he retired from MMA in 1997 to pursue a career in professional wrestling with New Japan Pro Wrestling and quickly became one of the company’s leading heels. After spending four years as one of Japan’s top gaijin wrestlers, Frye returned to MMA with the Pride Fighting Championships in September 2001, much more muscle-bound and sporting an American patriot persona in response to the September 11 attacks.

After developing a reputation for toughness and fighting spirit, mostly due to his legendary bouts with Ken Shamrock and Yoshihiro Takayama during his two year stint in Pride, Frye departed the promotion to compete in K-1 and Hero’s in 2004 but returned for the final Pride event in 2007.