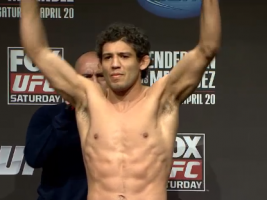 The first season of all women contestants will get two lightweight powerhouse’s as their coaches for the upcoming installment of The Ultimate Fighter. Dana White tweeted the press release late last night to announce  that Anthony Pettis will head up a team of strawweights and put them against a crew coached by Gilbert Melendez.

So much talk heading into UFC 170 about Melendez and his contract situation. Bellator MMA went as far as sending out a press release to say that they had put a plan together to bring him over. White himself said that Melendez was free to test the market. That testing phase didn’t last long at all. The UFC used its matching clause to ink a fresh deal with “El Nino”

The upcoming season is set to start filming in May with a targeted September 10th debut on FOX Sports 1. The cast will consist of 115 pound females who will battle it out to become the second women’s TUF winner but more importanly, the first strawweight champion. The majority of the class have crossed over from Invicta FC including champion Carla Esparza and fan favorite Felice Herrig.

At the conclusion of the season Anthony Pettis will defend his title for the first time. Melendez is 1-1 since coming over from Strikeforce but many saw his championship fight against Benson Henderson to go in his favor. He followed that up with an instant classic as he brutalized Diego Sanchez.