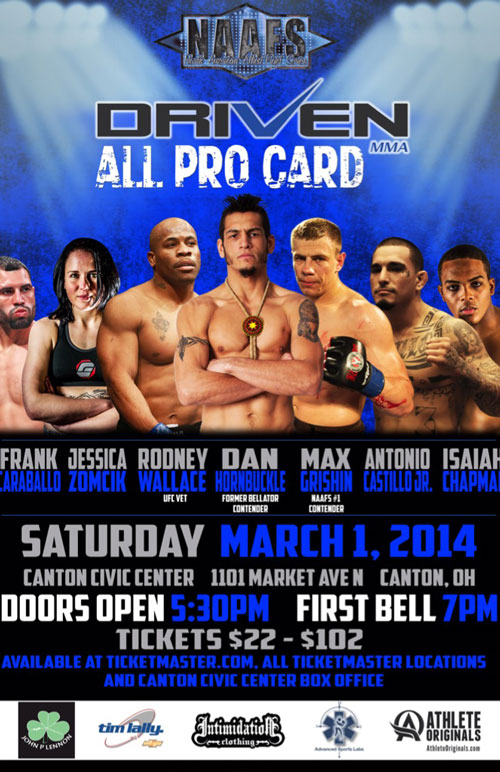 After months of rumors and speculation, company officials have confirmed the inaugural Driven MMA event will take place on Saturday March 1st at the historic Memorial Civic Center in Canton, Ohio.

Based in Scottsdale (AZ), Driven MMA will operate as a professional only mixed martial arts promotion and will initially host events in the Midwest as well as the West coast. Driven MMA’s ownership group will not lack credentials when it comes to the world of professional sports. Driven MMA Chairman John Lennon Jr. is a highly accomplished entrepreneur and co-owner of the AFL’s (Arena Football League) most successful franchises in the Arizona Rattlers.

Driven MMA will not be without familiar names to MMA aficionados. Midwest based promoter and NAAFS front man Greg Kalikas will oversee event operations as the companies COO. “Greg and his team did a remarkable job building the NAAFS from scratch and established their series as one of the premier launching pads for some of today’s biggest MMA stars. We hope to continue that success and take Driven MMA to the next level.” stated Lennon. In addition to Kalikas, well respected NAAFS matchmaker Nichole Long Castillo has been named as the league’s head matchmaker.  As one of the sport’s most prominent female figures, Long Castillo has been nominated and has won numerous industry honors including Promoting Real Women’s matchmaker of the year in 2010 and 2011.

“We want to come out strong with our first event and establish Driven MMA as a true international promotion.” said Long Castillo. “We plan to feature the best up and coming prospects in MMA along with a mix of recognized and established professionals. Our goal is to become the sports premier developmental league while instituting our own identity as a premier digital brand in the process. Our emphasis has and will always be to carve out a direct path that fighters know they can take to ultimately make it to the highest level of the sport.”

The complete Driven MMA “ONE” bout order is as follows:

*All Bouts Subject to change

Tickets for the Inaugural Driven MMA card will go on sale to the public on Thursday February 6th, 2014 and will be available at the Canton Civic Center box office and Ticketmaster.com. Driven MMA is proudly brought to you by Athlete Originals, Intimidation Clothing and Tim Lally Chevrolet. Fans can connect with @Driven_MMA for updates and breaking news or visit www.DrivenMMA.com.