Rampage Jackson: If Bellator wants me to fight two guys at one time, I’ll do it 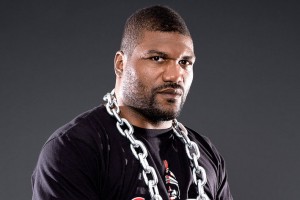 When Quinton “Rampage” Jackson enters the Bellator light heavyweight tournament against Christian M’Pumbu at Bellator 110 on Feb. 28 it will mark the Memphis native’s second fight for the promotion since leaving the UFC last year. This past November he knocked out Joey Beltran in a non-tournament bout at Bellator 108.

Jackson was vocal about his displeasure with the UFC after leaving and traditionally hasn’t been the easiest guy to work with. However, it seems the former UFC light heavyweight champ is right at home in Bellator (at least for now) — so much so that he agreed to enter their tournament — and even fight two men at once if it came down to that.

In a recent interview with Fight Hub TV, Rampage explained why he chose to enter the tournament:

“When I first got into Bellator I didn’t know what to expect. I didn’t know if I was gonna do the tournament or not, but those guys just been treating me so well and they’ve been treating me so cool and down to Earth. I’m like man, I’m gonna try this whole tournament thing, they asked me to do it and I said okay. They said that’s the only way you can be a champion [in Bellator] and I was like okay I’ll do the tournament thing. I’ll fight in the tournament. I’ll give it a shot. I wasn’t really trying to get the belt or nothing like that cause I felt like Bellator, some other guys probably deserved that spot, that glory, to get the belt and stuff like that. But they was like go ahead and try this tournament out, you’ll love it. So I said okay, I’m gonna do this here. I’m gonna do it.”

Asked what the turning point was that convinced him to enter the tournament, Rampage said:

“My manager and Bjorn [Rebney] was talking and stuff like that, but I’m not even talking about all the stuff they done for me, when I noticed all the stuff they was doing for me… People keep forgetting and think I just signed with Bellator, but I signed a deal with Viacom, and a lot of fans don’t understand that. So, they’ve been hooking me up. So I was like okay, I’ll hook them up, I’ll do this tournament. Basically, I’ll do whatever Bjorn and them want me to honestly. They hook me up so good. You treat me good, I’ll treat you good. So whatever they want me to do, they want me to fight two guys at one time I’ll do it.”

There’s a possibility Rampage and King Mo could end up facing off in this season’s tournament. But first Rampage has to get through former champ M’Pumbu and Mo has to get through Mikhail Zayats. Any thoughts on Rampage possibly becoming the next Bellator light heavyweight champ or do you think he’ll get put out of the tournament before he gets that title shot?
[ads1]
[ads2]

One thought on “Rampage Jackson: If Bellator wants me to fight two guys at one time, I’ll do it”