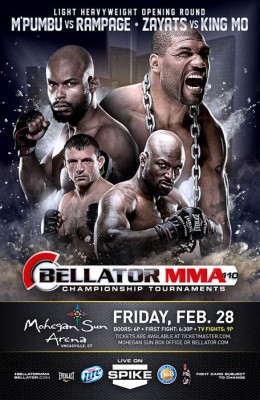 What MMA fan doesn’t want to see Quinton “Rampage” Jackson and King Mo Lawal throw down? It’s the biggest fight Bellator could currently make and on Feb. 28, both Rampage and King Mo will move one step closer to making that fight a reality.

Bellator 110 will air live on Spike TV at 9 p.m. ET from the Mohegan Sun in Connecticut on Friday, Feb. 28.

In addition to the light heavyweight semifinals, Bellator 110 will also include the opening round of Season 10’s Featherweight Tournament and a preliminary card filled with local MMA talent. Prelims will stream live on Spike.com at 7 p.m. ET.