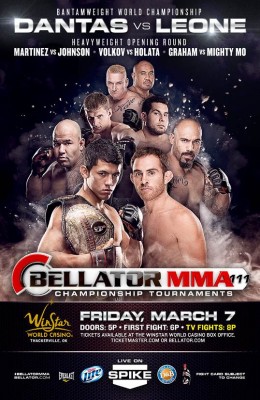 Newport Beach, Calif. (February 5, 2014) – Bantamweight Title contender Rafael Silva has suffered an knee injury and will be unable to compete is his scheduled March 7th title fight against reigning Bellator Champion Eduardo Dantas. While the injury will force Silva out of the cage, Former Bellator Tournament Finalist Anthony Leone will now step in and face Dantas for the Bantamweight Title on March 7th from WinStar World Casino, live on Spike TV.

“This was a difficult process with Silva suffering injury, but when we considered all our options, we felt like this decision made the most sense,” Bellator Chairman & CEO Bjorn Rebney said. “After we heard the news on Silva, we immediately made the call to our other Bantamweight Tournament winner Joe Warren.  Joe informed us he was still rehabbing a previous knee injury and would be unable to compete on the March 7th card, but he will be 100% ready to go for his originally scheduled fight in May. It’s always our goal to keep our fighters as busy as possible, and we didn’t want Eduardo sitting on the sidelines. With our Tournament Champion Replacement Clause in place, we contacted Anthony and are moving full steam ahead with our Bantamweight Title fight on March 7th to headline a huge night of fights.’

“It was really hard to have to Bjorn call me and have to turn down a fight, but my knee just isn’t at a place I’m comfortable with, and my timeline has always been to get back in the cage in May,” Warren said. You know ‘The Baddest Man On The Planet’ will step in against anyone, and it would have been nice to take that belt away from Dantas a few months early, but I’m going to heal up, train like a madman, and whoever has that belt come May, they better shine it up for me, I’m taking it home.”

Only 26, Leone has was riding a four fight win streak, including an impressive victory over former Bellator Champion Zach Makovsky before suffering a close decision defeat against Silva in the Bellator Bantamweight Tournament Finals. The submission ace knows the skills Dantas brings to the cage, but is ready to surprise the world and capture Bellator gold.

“This is a tremendous opportunity for me and when I got the call from Bjorn, I jumped at the opportunity,” Leone said. “Dantas is incredibly tough and I’m in for a tough fight, but I’m ready for this title fight, and I’m going to make the most of the opportunity.”