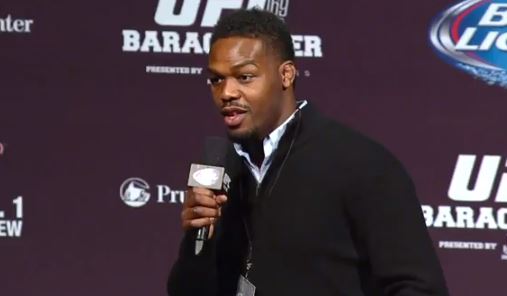 UFC light heavyweight champion Jon Jones has made it clear that one day he would like to move up to the heavyweight division and challenge for the title. However, during a fan Q&A ahead of the UFC 169 weigh-ins, “Bones” said he thinks a super fight against UFC middleweight champion Chris Weidman would be “awesome” and that he would “absolutely” be open to the fight.

Here is what Jones said:

“Dude I think it would be phenomenal. I think it would be awesome” Jones also said. “I have got no reason to make comments about Weidman. Everything you say up here, it gets brought back to the fire, so I don’t want to offend him, I think he’s a great guy, but I’m very confident,”

Jones will defend the title against Brazilian native Glover Teixeira at UFC 172 on April 26th, but following his epic “Fight of the Year” matchup against Alexander Gustafsson, many fans are already looking ahead to that rematch. Jon has also expressed his desire to square off against the Swedish fighter again as it’s a fight the fans want to see.

Meanwhile, undefeated heavyweight Daniel Cormier, who exchanged heated words with “Bones” on Twitter last year, has dropped down to the light heavyweight division and will face Rashad Evans at UFC 170. I expect Jones and Cormier will fight at some point in the not too distant future, so we will have to see if Jones can hold on to the gold, although the same can be said for Weidman.

The “All-American” is coming off a second victory over Anderson Silva, who is considered by many to be the greatest martial artist ever, and is expected to face a seemingly unstoppable Vitor Belfort in July.

We will have to wait and see how the next couple of fights go, but if they both manage to hold on to their titles, the idea of a Weidman vs. Jones super fight could start to feel like a real possibility.