Knockout video of the Day: Thief gets piss knocked out of him 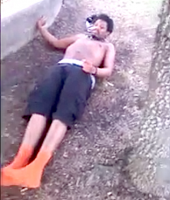 First of all let me just say that Goldy and Rogan’s jobs as longtime UFC commentators could be in jeopardy if Dana White ever sees this video. What you are about to witness happened one particular sunny afternoon in the city park when a young man tried to run away with another young man’s hat and shirt without his permission.

When the young man realizes the fellow is about to run off with his clothes he takes off after him, which prompts the thief to do what all smart thieves do when they are caught — run! However, unbeknownst to the thief there’s an immovable object awaiting his quite stoppable force and his name is Mr. Elm.

Mr. Elm stops the thief with one giant shot to the dome, he goes down and out which allows the young man to get his shirt and hat back, and being the nice guy that he is, he even helps the thief sit up to regain his senses. It is at that point we realize Mr. Elm actually knocked the piss out of the thief. Literally. Now sit back an enjoy the greatest work of unintentional art you will see all day.