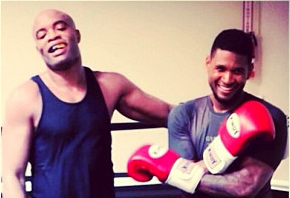 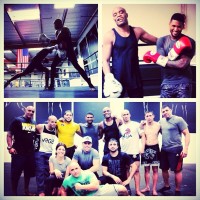 All good things must come to an end, or so the saying goes. In Anderson Silva‘s case that end came last Saturday night when he took a left hook to the chin from Chris Weidman that put him on his back and ended a seven-year unbeaten streak and the longest title reign in UFC history.

What you are about to see here is a very intimate look as one of Anderson’s students, the famous recording artist and R&B singer Usher Raymond consoles and gives advice to the fallen champion.

“Times like this are a lesson,” says Usher. “And I think you know the lesson. I guess the student becomes the teacher a lot of times. You’re still going to be an incredible teacher, but as a student you have to understand the responsibility that comes with wearing that crown. And I just wanted to say this to you because you give me hope.”

As someone who obviously understands what riches and fame are about, Usher seems to be telling Anderson that a man in his position — the undisputed G.O.A.T. — does not need to, nor should he be in there showboating like that. As champion there are kids and people all over the world who look up to him, and his actions were not befitting one in his position.

At least that’s how I took Usher’s words to him.

Boxing legend Roy Jones Jr., who has also known that fall from grace, also had some words for Anderson, basically telling to keep his head up and he knows it’s hard to focus when there are other things on his mind he wants to do. Translation: Roy believes Anderson was distracted and his mind wasn’t in the fight because he’s been wanting to fight him in a boxing match.

Roy was ringside and Anderson made it known that he wanted to fight him. There was also all the “super fight” talk. It’s very possible Anderson was looking past Weidman somewhat and he also could have been trying to show-out a bit in front of Roy Jones Jr.

Anderson was not unbeaten. He’s experienced loss before, just not since he became the king of the MMA world, not since he’d become uber-famous and uber-rich. Will he learn the right lessons from this loss? Will he come back focused, serious, HUMBLE and ready to prove a point in the rematch?

And what if… just what if he starts showboating in the rematch — just to prove a different kind of point? At 38-years-old does he still have it in him to return to the mountain top? Georges St-Pierre did it. Now we will see if Anderson can do it.