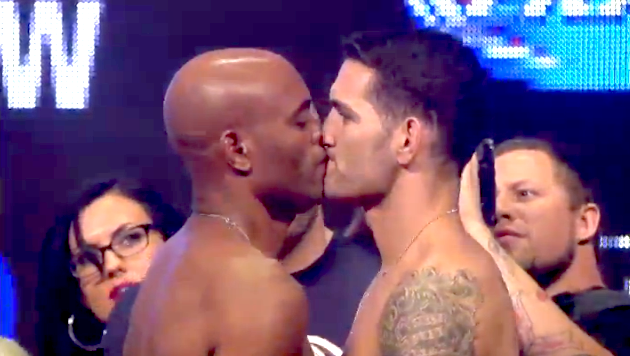 The internet is abuzz over kiss-gate at yesterday’s UFC 162 weigh ins. Was it intentional game planning on the part of Silva? Was it accidental? The world may never know, but whatever the case may be it was a great reminder that, at the end of the day, MMA is a sport that requires us all to be comfortable with the concept of two sweaty dudes rolling around on the floor with their legs wrapped around each other for long periods of time. It is what it is, and we’ve come to terms with it. At the end of the day all the guys on this list could beat the crap out of you or me in a heartbeat, and they deserve all the props in the world for doing what they do; however, sometimes all we can say is… “pause.”

#8: Anderson Silva and Chris Weidman get up close and personal

Anderson Silva is second only to Fedor Emelianenko when it comes to beating opponents before he even steps in the cage. There is however a fine line between intimidation and downright absurdity. Major props go to Chris Weidman for taking it all in stride, and not letting Silva’s staredown smooch get in his head. Which is a lot more than I can say for the next ‘pause’ moment on the list…

#7: Heath Herring wants everyone to know he’s not gay

Yoshihiro Nakao is no Anderson Silva, but that didn’t stop him from trying to play some pre-fight mind games with Heath Herring back at K-1 Dynamite 2005. Unfortunately for Nakao, Herring wasn’t as forgiving as Chris Weidman. Herring took a swipe at Nakao, causing the japanese heavyweight to collapse to the canvas, and setting off the most insecure and repetitive series of heterosexual reaffirmations since Liberace started suing people.

No one really knows the reason why men have nipples, but this surely isn’t it. In order to stand in front of thousands of people half naked, you have to be pretty comfortable in your own skin. Nothing says comfort like rubbing the hell out of your nipples on pay-per-view before getting all rough and tumble with the equally half naked dude standing across the Octagon from you. At least this is only the second most embarrassing thing to happen to Rashad in the UFC.

#5: Rampage gets really insistant on being treated “like a bitch”

The Ultimate Fighter 10 was kind of unfortunate. Between the overly contrived Rampage-Rashad beef and heavyweights who couldn’t last more than one round in anything but a buffet line, TUF 10 was a disappointment for anyone who actually wanted to see, oh I don’t know, a bit of quality MMA on their MMA reality shows. Somewhere between Kimbo Slice’s 80 year old knees and Roy Nelson being Roy Nelson, Evans and Jackson took a moment to parse out just what their relationship would look like should they ever find themselves in ancient Greece or a prison cell. The first two times Rampage says “treat me like a bitch” it comes off as a dare; the next 27 times… eh, kind of starts to sound like a request. At least it was more entertaining than their actual fight after the season ended.

At some point, a TUF producer had to have walked into a meeting and said, with a straight face, “I’ve got an idea! Let’s put booze back in the house, because that worked super well before!” What makes this precious TUF moment all the better is that Julian Lane had been eliminated for weeks at this point in the show and was really around for comedic effect. Lane is the kind of guy that wakes up in the morning, looks in the mirror, and says “it’s showtime, world!” True to his future calling as that guy who tries to start fights at little league baseball games, he just wants to stand and bang. Two parts bromance, one part drunk war path equals television gold and a spot on our top ‘pause’ countdown.

Shinya Aoki is one of the most dangerous grapplers in the sport, and one of the few people on the planet who can, and will, break your arm in half while wearing rainbow colored tights. But the Technicolor Dream Spats are only the tip of the iceberg. I’ve honestly racked my brain for witty commentary on this, but there’s literally nothing I can say that this picture can’t… 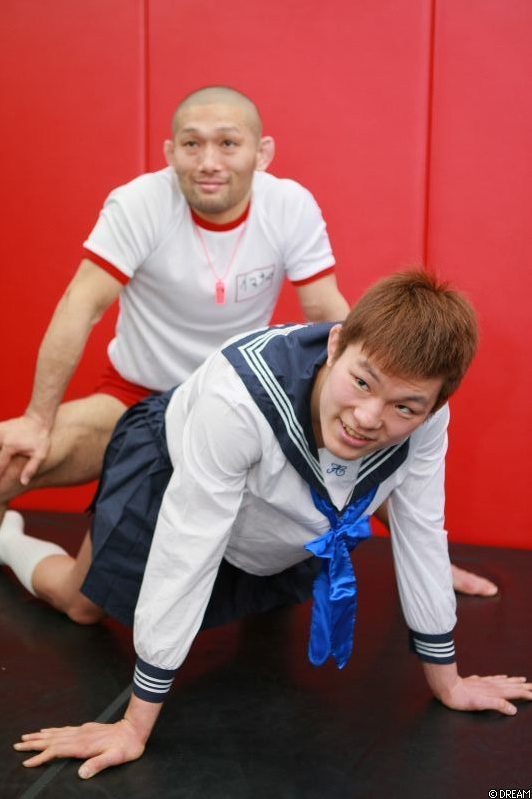 This is the reason why Bob Arum and your non-MMA fan friends laugh at you. Part of the beauty of MMA is that even the most unassuming, mild mannered looking people instantly transform into death-dealing balls of flying right fists and knees, then immediately go back to palling around with their buddies… shirtless… in spandex shorts…Skip to 1:33 to see the little horse drill in all its piggy backing, man-slapping glory.

Last, but far from least, on our countdown is Japan’s own Yuichiro Nagashima. Without this taking some kind of weird ethnocentric cultural Darwinist twist, let’s all just admit that there’s a lot of weird stuff that goes down in Japan that just doesn’t fly elsewhere. Don’t play dumb; you’ve seen what they do with tentacled aliens over there. While Aoki just dabbles in the niche pastime of dressing up like the kind of anime characters that you were weirdly into sometime around age 12, Nagashima has been far from shy about letting his schoolgirl cosplaying flag fly high. When he’s not busy demolishing faces in the K-1 ring, or engaging in bizarre novelty fights with Aoki, Nagashima dons enough schoolgirl attire to warrant the attention of an entire National Geographic segment. No seriously  they had to get scientists to weigh in on this…