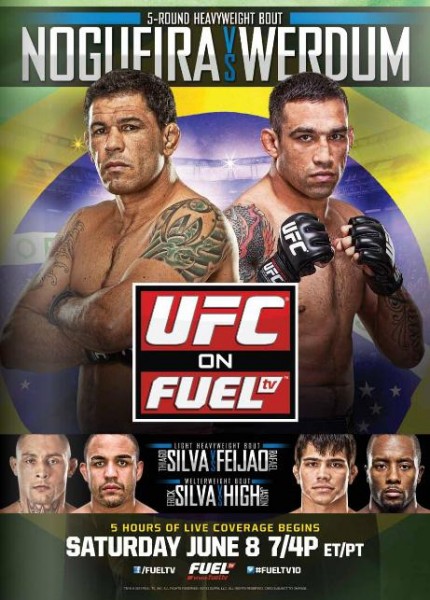 The ProMMAnow.com staff puts on their prognostication pants to perform great feats of prediction for your pleasure. As UFC on FUEL TV 10 gears up to get down on Saturday, we’re going to tell you who we think is going to win and lose and why. We were brave enough to share our picks, why don’t you do the same in the comments box below. Enjoy.

JAN GAETJENS: This is one of those rare matchups in which Big Nog’s skills working off of his back will be largely negated by his opponent’s BJJ talents. Werdum’s ground game is unique among heavyweights in that he does not have to sacrifice effective top control in the name of submission defense. Werdum by Decision

JACK BRATCHER: Werdum’s striking has evolved to the point he’s going to pose some real problems for Nogueira. As a straight boxer, Werdum probably has the upper hand, but in overall striking Werdum takes him. Also in the clinch he’s going to be a handful for Nog. If this fight goes to the ground, that’s where it’s going to get really fun. The one caveat here is if Werdum shows his hero too much respect. I think Werdum is going to do what few men have and finish Nog via TKO.

JAN GAETJENS: Cavalcante will look to keep this fight standing, but that shouldn’t prevent Silva from closing distance and getting the upper hand of close-range exchanges. If Silva can force Cavalcante into the clinch and land some clean strikes upon separation, he has the kind of power that could see him dropping Cavalcante and finishing him with strikes on the ground. Silva by (T)KO

GARY THOMAS: Two men coming off of suspensions…wow. Is this a make or break for ’em? Maybe. I think it will be an entertaining fight. I think Silva will be too much but I do see this going the distance. Pick – Silva via Decision

JACK BRATCHER: This is an odd fight as both guys are coming off suspensions for failed drug tests. What is also odd is Silva hasn’t won a legit fight since 2009. His last two wins have been overturned; once for falsifying a urine sample and once for failing his test due to marijuana metabolites. I really like this match-up, both guys are super tough and hit hard. Oh by the way, Feijao has 11 wins and 11 knockouts. Feijao wins this by knockout. Take that to the bank.

JAN GAETJENS: Mendez is a bit of an unknown quantity going into this one. Meanwhile, Sarafian was extremely impressive in his stint on TUF Brazil, and has a submission game that could pose a serious threat to the newcomer Mendez. Sarafian by Submission

GARY THOMAS: Sarafian shouldn’t have much trouble with Eddie Mendez. Although Mendez has had 1 fight in Strikeforce I doubt he will be ready for the craziness of Brazil. Could you imagine the adrenaline dump? Pick – Sarafian by Submission Round 2.

JACK BRATCHER: Mendez makes his UFC debut against submission specialist Sarafian who dropped his UFC debut to CB Dollaway via split decision. I like Mendez’s well-roundedness as compared to Sarafian and am taking the newcomer via decision.

JAN GAETJENS: It’s easy to sleep on Jason High on account of his borderline journeyman status (and of course the fact that I can’t get the image of Marius Zaromskis decapitating him out of my head). At 31, he’s still undoubtedly a dangerous fighter, but he hasn’t seen a real challenge since squaring off against Mach Sakurai back in 2010. Silva may have dropped his last fight to a very game Jon Fitch, but he proved his ability to convincingly go the distance against elite level competition. Silva by (T)KO

GARY THOMAS: Good fight lined up for High vs. Silva. Silva got Fitched but that doesn’t make him any less dangerous. High comes over from Strikeforce and is riding an impressive streak. Silva is tough but I am going with High. Pick – High via Submission Round 3.

JACK BRATCHER: Erick Silva’s only legit loss was to Jon Fitch in Oct. 2012. Jason High is tough and this is his first fight in the UFC since 2010. Here’s the problem. He’s going into enemy territory to fight a very talented Mr. Silva. High doesn’t seem worried about the pressure but I gotta go with Silva via decision.

JAN GAETJENS: Jason continues his tear through the Brazilian scene with relative ease. Jason by (T)KO

GARY THOMAS: Rony Jason is on a tear and I don’t know much about Wilkinson but I doubt with a name like that he will get many favors in Brazil. I look for Jason to finish this fight early. Pick – Jason via TKO Round 2

JACK BRATCHER: Brit Mike Wilkinson comes in for his second UFC appearance against Rony Jason who comes in for his third appearance. Wilkinson is undefeated against a lot of guys you’ve probably never heard of. Both guys are pretty well-rounded but being Jason has the home field and experience advantage, I’m taking him via decision.

JACK BRATCHER: Twenty-one-year-old William Macario is undefeated at 6-0. Most of his wins have come via (T)KO, while most of Leonardo Santos’ wins have been via submission. Santos is 33 and carries a record of 11-3. Both guys were part of Team Nogueira on TUF. I have to go with Macario. He’s younger and he’s finished every single opponent he has faced. I say he finishes Santos as well.
[ads2]

One thought on “ProMMAnow.com UFC on FUEL TV 10 staff picks”