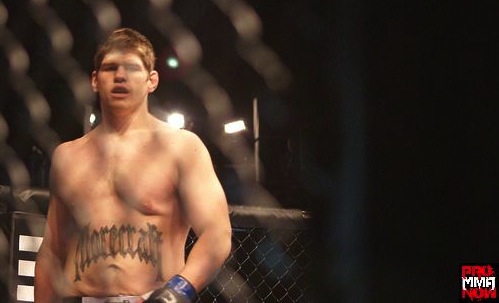 [ads2]Remember Christian Morecraft? It’s been so long since he’s fought you may have forgotten about the 26-year-old Team Bombsquad heavyweight. The Washington, D.C. native was last seen in action at UFC on FX 1 versus Pat Barry back in Jan. 2012 in Nashville.

Though he lost the fight by first round knockout, it was a back-and-forth brawl that earned Morecraft and Barry “fight of the night” honors. If we are to believe him, that will apparently be Morecraft’s last bout as he walks away from the sport of mixed martial arts, at least for now.

“To anyone who still follows, competing in the UFC is a tough job on many different levels – getting better staying focused and all the other (expletive) that life brings to you and not to mention I still have to work a full time job to support yourself in the mean time. There’s plenty of “ex professional athletes” out there who are lost , broke, and jobless when competing is over, so with that being said trying to find an easier way to make a living and most importantly be happy so with that being said I’m saying GOODBYE TO THE FIGHT BUISINESS [sic] for right now. Nothing’s set in stone because we all know that nothing in life is, but for now I’ve got some other matters to take care of. Thank you all for your support over the years. Thank you and god bless everyone.”

Morecraft began his pro MMA career in 2008 and went 6-0, all stoppages, before signing with the UFC in 2010. He went 1-3 inside the UFC Octagon, suffering KO losses to Stefan Struve in Aug. 2010, Matt Mitrione in June 2011 and the aforementioned Barry.

Morecraft’s lone UFC win came against Sean McCorkle via guillotine choke submission in the second round at UFC Fight Night 24 in March 2011.

Morecraft made headlines in Sept. 2012 when he was arrested by the Barnstable, Mass. Police Department on suspicion of operating a motor vehicle while under the influence of alcohol, reckless driving, speeding and driving without a license.

Being that Morecraft is still relatively young, and as he stated, “Nothing’s set in stone because we all know that nothing in life is,” there is a chance he could return to MMA one day. However, with three brutal KO losses within a year-and-a-half span inside the Octagon, it’s doubtful that return would be with the UFC.
[ads1]