Bellator 89: Dantas vs. Galvao to headline Charlotte event on Feb. 14 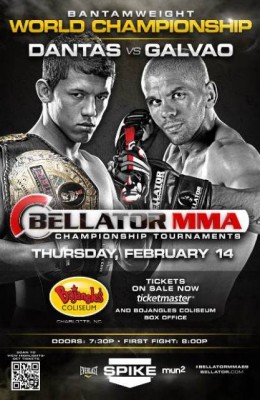 The Bellator MMA promotion will be visiting North Carolina for the first time when they touch down in the Bojangles Coliseum venue with the Bellator 89 event on February 14th.

A bantamweight title fight between Eduardo Dantas (14-3) and Marcos Galvao (13-5-1) will be featured in the main event.

The opening round of the middleweight tournament will also take place on the card. The event will air LIVE on Spike TV at 10 p.m. ET with the preliminary bouts airing FREE on Spike.com at 8 p.m. ET.

Tickets for the event are on sale now and can be purchased at Ticketmaster.com or by visiting The Bojangles’ Coliseum Box Office, with tickets starting at $37 dollars.

“Eduardo and Marcos are two of the best bantamweights in this sport, and with the ties they both have to one of the best MMA camps in the world, Nova Uniao, this has the makings of an incredible fight,” said Bellator Chairman & CEO Bjorn Rebney. “We’ve got a stacked Middleweight Tournament featured on the card along with a number of great preliminary fights on Spike.com, so the Charlotte crowd is in for something special on February 14th.”

One thought on “Bellator 89: Dantas vs. Galvao to headline Charlotte event on Feb. 14”