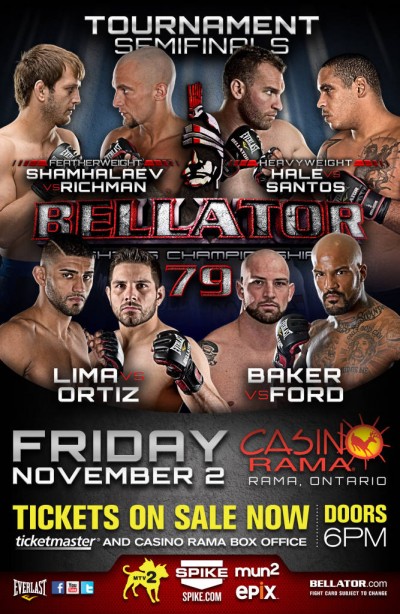 Mixed martial arts fans can watch a LIVE stream of the entire Bellator 79 event on ProMMAnow.com (www.prommanow.com) starting with the preliminary card at 7 p.m. ET (4 p.m. PT).  LIVE text results and play-by-play commentary will be provided below.

Round 1 – Touch gloves. Leg kick from Baker.Nice right, then an uppercut from Ford, Thai clinch and a knee to the body followed by a takedown from Ford. Ford postures up with a clubbing left and an elbow, big right hands as Baker covers up. Ford lays in half guard, Baker gets full guard. Hammerfist from Ford, elbow. Baker looks for an armbar as Ford postures up and dives in with a big right. Baker with full guard and is bleeding from the eye. Ford unleashes some big ground and pound and Baker is being overwhelmed. Baker gets to his feet. Gets rocked by a huge knee as he ducked down, he’s wobbled. Ford puts him down  but Baker stops over and gets side control from the top. Ford gets to his feet. Eats a knee to the body but counters with some big punches, push kick, head kick, Ford drops levels for a single. Baker has taken some huge shots in this fight. Baker sprawls and prevents Ford from getting the full takedown. PMN scores the round 10-9 for Ford. (easily could be a 10-8)

Round 2 – Doctor checking out Baker before the round starts, looks in his eyes with a flashlight. Lets it go. Touch gloves. Front kick from Ford. Right, uppercut and a front kick to the chin from Ford. Leg kick. They trade hooks. Left jab from Ford. Body jab from Baker. He pushes Ford to the cage. Knees to the thighs and a foot stomp from Baker. Body shots and dirty boxing from Baker. Ford was breathing heavily between rounds. Baker was not. Baker presses forward with punches. Superman punch and a knee to the jaw from Ford. They trade punches from the pocket. Baker has one helluva chin. Clinched against the cage, Baker gets a takedown, takes his back, one hooks in, softening him up. Looking for the choke. Ford scrambles and gets top position but is just hanging on at this point. Baker gets full guard, gives an elbow or two. PMN scores the round 10-9 Baker.

Round 3 – Jab from Ford. Leg kick from Baker. Takedown from Ford but Baker scrambles right back to his feet. Couple of shots from Baker, leg kick. Ford grabs a single pushes Baker to the cage. Knee from Ford. Baker backs him up , leg kick, checked. Ford ducks a punch and puts Baker on his back. Elbows off his back from Baker. Full guard. Ford resting. Ref wants action. Ref stands them up. Ford with another takedown easily. Rubber guard, omoplata attempt from Baker. Ford gets out, gets to side control as Baker gets to his knees. Great sweep from Baker and gets full mount. Gives punches, Ford gives up his back and Baker looking for the choke as he gets both hooks in and rolls him over. Ford defends, spins around to top position now inside Baker’s full guard. Baker staying busy off his back with strikes. Ford postures up with big punches. Hammerfists. Baker scrambles to his knees before the bell. Great fight. PMN scores the round 10-9 and the fight 29-28 for Ryan Ford.

Ford said Baker was the toughest guy he ever fought.

Round 1 – High kick from Lima, leg kick. Leg kick from Lima, Ortiz catches it, shoots, stuffed. Ortiz with his hands down. Lima with a leg kick, stalking. Huge right from Lima right on the chin drops Ortiz. Lima moves into full mount, roughing him up with punches. Ortiz gives up his back, both hooks in. Flattens him out with back mount, landing big shots to the side of the head, taking his time. Ortiz defends the choke momentarily. More punches, Lima rolls as he goes for the choke but can’t get under the chin. Ortiz gets a reversal and is on top inside full guard. Lima with wrist control. Ortiz stands over him and eats a huge up kick to the chin. Stuns him and Lima gets to his feet. Ortiz’s hands still low. Eats a couple shots and a big knee to the body. Lima dodges a couple punches. Slips a jab. PMN scores the round 10-9 for Lima.

Round 2 – Lima eats a one two from Ortiz. Big right from Lima snaps Ortiz’s head back. Front kick to the knee from Lima. Left hook from Lima. Ortiz’s hands down. Big body kick from Lima knocks Ortiz against the cage. Huge leg kick from Lima. Lima  pressing forward, lands a big right hook. Ortiz fires back but no dice. Lima lands a big straight left, again, snapping Ortiz’s head back. Left right from Lima. Big leg kick drops Ortiz. Lima gets a front headlock as Ortiz is on his knees. Switches to an anaconda choke, lets it go. Ortiz gets to his feet, clinched, knees to the thigh of Lima. Ortiz drops levels looking for a takedown. Big knee to the chin followed by a right and several punches from Lima and Ortiz is face is beat to a pulp. Bell sounds. PMN scores the round 10-9 Lima.

Round 1 – Hale eats two big lefts and a right after throwing a front kick. Santos locks on a standing guillotine. Body shots from Hale. Hale gets free, Santos backs him up. Hale clinches up but Santos puts him on his back, lands in side control. Hale makes his way to his feet but eats some big punches on the way up. Santos drops levels for a single against the cage as Hale gives him shots to the body. Santos lets the leg go. Kidney shots from Hale. Ref separates them. Santos already looks tired. Right from Santos, eats an uppercut and goes down to his knees. Hale gets on his back and lands punch after punch to the side of Santos’ head. Santos is doing nothing but covering up. That uppercut pretty  much put him out. That’s it folks as Hale moves on to the finals.