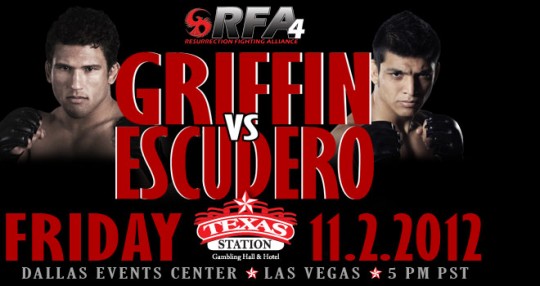 We’ve got the ProMMAnow.com (www.prommanow.com) crew on the scene in Las Vegas tonight for Resurrection Fighting Alliance (RFA) 4. Our boys Drew and Anton will be hitting up the post-fight video interviews while I tend to play-by-play duty via the AXStv broadcast nearly 3,000 miles away in the comfort of my home. That’s how we do it son!

There are two UFC fighters’ brothers on this card; Chidi Njokuani and Sergio Pettis – both very talented up-and-comers and we’ve also got 2008 Olympic wrestler Steve Mocco making his pro MMA debut against former University of Missouri wrestler Tyler Perry, who is 2-0 under the RFA banner (1 am, 1 pro).

Round 2 – Liver kick from Griffin. Front kick right to the chin from Griffin. Beautiful. Snapped Effy’s head back. Inside leg kick from Griffin. They clinch, Knee from Griffin and a right on the break. Leg kick from Effy. Nice left jab from Griffin. Efrain presses him to the cage. Griffin turns him around and puts him on his back. Up kick from Efrain. Griffin postures up with a few right hands, inside the guard of Efrain. Drops a few elbows. Efrain throws up for an armbar. Griffin not really doing any damage but staying busy and holding him down. PMN scores the round 10-9 Griffin. Wish this was five rounds.

Round 3 – Effy ducks a big right. Griffin tries to shoot, stuffed. Leg kick from Effy. Knee from the clinch from Efrain. Griffin shoots, grabs a single. Effy defends. Body shots from Griffin. Couple knees from Efrain from the clinch. They square up. Couple knees from Effy. Overhand right from Griffin, puts Effy on his back. Tyson in half guard, drops a couple elbows. He moves to side control with under 3:00 to go. Effy recovers full guard. Looks for an armbar, goes belly down. Griffin turns and escapes. Griffin goes for a guillotine, Griffin pops his head out. 2:00 to go. Now in half guard, Griffin staying busy with light punches. Effy gives up his back. Gets to his feet. Griffin with a body lock from the back. Big knee to the thigh from Griffin. Effy looks for a guillotine, too sweaty, Griffin pops out, gets a brief takedown. Effy gets Griffin to the mat after a slip. Griffin holding his leg, punches to the body from Effy. PMN scores the round 10-9 and the fight 30-27 for Griffin.

Round 2 – Couple leg kicks and a body kick from Njokuani. Body kick, another one, big one! Right hand and a leg kick right behind it knocks Dace off balance. Chidi looks like Anderson Silva in there. Very technical. Body kick and a right elbow from Chidi. Dace tentative. Front kick from Chidi. Left right body kick. Right counter, catches a leg and punches him. Dace with an inside leg kick. Chidi dumps him on his back, hammerfists him, lets him up just in time for a body kick. Leg kick. Dace cut under his eye. Dace tries something strange and slips to the ground.  Dace lands another low blow. Ref calls for scissors to cut some tape. Dace gets another warning  for the low blows. One two, leg kick from Chidi knocks Dace flat on his face. Huge body kick from Chidi. Chidi catches a kick, sweeps the back leg. It’s like Spider Silva vs. Forrest Griffin at this point. Chidi is just on another level. Leg kick and a right hand from Chidi. Dace has NOTHING to offer. PMN scores the round 10-9 Chidi.

Round 3 – Right hand from Chidi. Leg kick inside. Huge right hook drops Dace, postures over him with several right hands and Kim Winslow has seen enough. My god… UFC needs to sign Chidi Njokuani right now!  This dude is baaaaad.

Round 2 – Body jab and a leg kick from Yager, again. He slips a punch from Cruz, gives him a knee to the body and Yager presses him to the cage once again. Foot stomps from Yager. Cruz with a knee and some dirty boxing. Knees to the thighs from Yager. Ref separates them. Front kick from Cruz. Leg kick Yager, he shoots for a single, stuffed. He presses Cruz to the cage. Foot stomps from Yager. Knee from Cruz. Ref separates them again. Big inside leg kick from Cruz. Big inside leg kick from Yager. Couple of big punches from Cruz, nothing lands too solid but it forces Yager to shoot. Cruz  locks him in an inverted triangle while Yager is looking for the takedown. What a beautiful setup, they roll over and Yager taps out. Holy crap that was amazing! Submission of the month nominee FOR SURE, maybe of the year!

Yager was heard saying to his corner, “I didn’t know what to do, man.”

Round 1 – Leg kick inside from Palmer. High kick from Palmer. Inside leg kick from Paixao. Palmer gives one back. Paixao tries a spinning leg sweep, misses. Blocks Palmer’s high kick. Left from Palmer. Inside leg kick from Paixao. Palmer gets a takedown. Paixao landing strikes off his back. Palmer postures up with some nice punches. Paixao goes for a leg and Palmer pulls out and stands. Paixao stands. Palmer with another takedown after exchanging strikes. Paixao gets back to his feet. Leg kick inside from Palmer. Paixao catches a kick, tries to dump him. Paixao goes for another spinning leg sweep, misses. PMN scores it 10-9 Palmer.

Round 2 – One two from Paixao, Palmer shoots under, big slam from Palmer after being held in a guillotine. Palmer on top in half guard. Butterflies from Paixao gets Palmer off him. Palmer stands over the downed Paixao and kicks at his legs. Nice left from Palmer connects, puts Paixao on his back. Paixao with full closed guard. Ref tells them to stay busy. Palmer not doing much from the top. Ref stands them up. Leg kick inside from Palmer. Paixao gives him one back. Front kick from Palmer. Big inside leg kick from Paixao. Another one, another. Palmer puts Paixao on his back. Paixao goes for a leg but Palmer escapes. Palmer goes for a heel but eats some punches before the bell. PMN scores it 10 Palmer.

Round 3 – Touch gloves. High kick from Palmer, front kick. He ducks under and puts Paixao on his back. Paixao was holding a guillotine but Palmer pops his head out, now on top. Paixao with a half butterfly guard. Now full guard. Elbow from off his back from Paixao and it opens Palmer up as he drips blood everywhere with 3 minutes to go. Paixao continues to elbow Palmer’s head. Paixao is beating him up off his back really. Palmer’s face is a bloody mess. Elbow from Palmer. He’s staying just busy enough from the top but doing no damage. Paixao tries to sweep with butterflies. Huge cut on the bridge of Palmer’s nose. Paixao is to his feet. 30 seconds to go. Body shot from Palmer. PMN scores the round 10-9 for Paixao and the fight 29-28 for Palmer.

Round 1 – Trindade tags him with a right. Krause lands a head kick, seems to stun Trindade even though he catches it. Krause lands a right on the chin, followed by a left to the chin and Trindade goes down and this fight is done. The ref stops it.