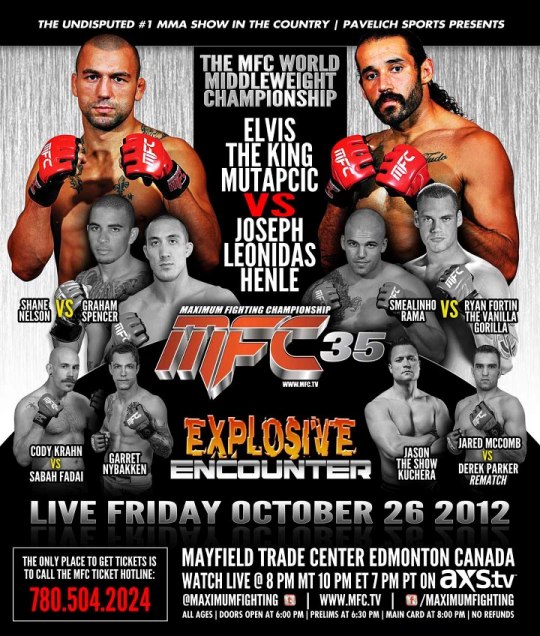 Round 1 – Amazing back and forth slugfest, both guys leaving it all in the ring. Grandbois 10-9

Round 2 – Complete Rock em’ Sock em’ Robots, punch after punch back and forth. Grandbois backed Kuchera into a corner and landed big shot after shot until the ref stepped in. Both guys gave everything they had.

Round 1 – Fadai throws a leg kick, Krahn puts him on his back but Fadai immediately locks him in a triangle. After some struggle from Krahn, Fadai tightens the noose and Krahn is forced to tap. He may have underestimated Fadai’s ground game. As Fadai gets up he shoves Krahn and tells him he should’ve made weight. The ref has some words with Fadai about this.

Round 1 – McComb with a leg kick. After some rudimentary striking “The Goon” Parker gets a body lock takedown and gets full mount on McComb. Parker unable to do much damage on the ground before McComb gets to his feet before the bell. Parker 10-9

Round 2 -Parker standing straight up, Misses an ugly spinning backfist. McComb lands a head kick. They tie up in the corner, Parker looks for a single leg takedown, gets McComb down. McComb on his hands and knees but Parker flattens him on his back and lands a couple elbows. With Parker’s handlebar mustache and pink shorts, Pat Miletich said he looks like the Freddy Mercury of MMA. Knee to the chest of McComb by Parker. Body shots from Parker, now puts McComb flat on his back but the ref stands them up before the bell. 10-9 Parker

Round 3 – Parker taking some big shots. McComb stuns him with some big punches. Parker is bleeding, eats a big leg kick. Parker looks about out of gas and his leg is purple and swollen. Parker throwing arm punches… looks like he’s still fighting on the ice. He lands a big right though and backs McComb into the corner, ties him up but McComb puts him on his back. Parker landing some nice elbows off his back. Big leg kick from McComb after he lets Parker up. They tie up before the bell. Fun fight. Parker is a NUT. A very tough nut… fun to watch. 10-9 McComb

Round 1 – Rama puts Fortin on his back, gets mount, unleashes ground and pound. Rama goes for an armbar but Forting reverses. Scramble and Rama takes Fortin’s back as he turtles up. Rama lands some punches, then gets both hooks in and chokes Fortin out.

Round 1 – Spencer gets a takedown early in the round. Nelson using elbows to the head off his back. Nelson gets to his feet, goes for his own takedown, gets it but Spencer is immediately back to his feet. Clinched. Dirty boxing until the end of the round. Spencer has a cut over his right eye. 10-9 Spencer

Round 2 – Spencer gets a body lock takedown before the 4-minute mark. Spencer inside half guard working the ground and pound from top. Back to the feet, Nelson shoots, stuffed, Spencer gets full mount. Nelson gives up his back, Spencer looking for the RNC with both hooks in. 1:00 to go. Nelson survives. 10-9 Spencer

Round 3 – After tying up Nelson jumps guard into a guillotine attempt, loses it and Spencer now has top control inside full guard and delivering punishment. After getting back to the feet Spencer slams him, lands in side control. Nelson recovers half guard but is eating ground and pound and Spencer moves back to side control, nice elbow. Under 1:00 to go. Spencer ends the round on top delivering punishment. 10-9 Spencer

NOTE: Interesting Spencer is offered a shot at the 155 lb. title but says he’s not sure he wants to take it because he doesn’t want to be defending a belt at 155 — he would rather stay at 145.