Dave Bautista gets new opponent at ‘Real Pain’ this Saturday 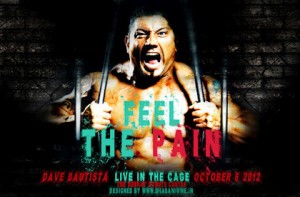 Rashid Evans is out of the fight against former WWE Champion Dave Bautista this weekend at “Real Pain” in Rhode Island. The promotion announced this earlier today. Stepping in on short notice will be a veteran Vince Lucero.

Lucero has an extensive fight career with 43 fights to his credit. He has notched 11 knockouts and fought the likes of Tim Sylvia as well as Ruben Villareal. What is amazing is that the 22-21 Lucero gets the call to fight Bautista who is making his professional debut.

Bautista is a six time WWE champion and is said to be putting himself through a grueling training camp in preparation for this event. Rumors first started circulating in 2011 that Dave was trying to get into the cage and it was even announced that he was close to an agreement with the pre-Zuffa Strikeforce.

This fight takes place Saturday October 6th at the Dunkin’ Donuts Center in Providence Rhode Island. Several former UFC fighters are slated to appear on the card. The event will be available on DirecTV and Cesar Gracie is scheduled to be one of the commentators for the night.