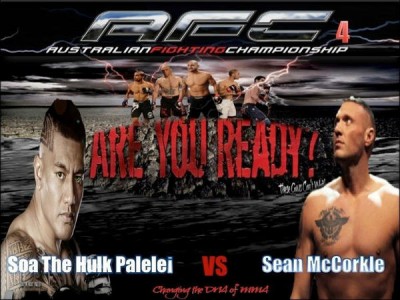 The Australian Fighting Championships will host its fourth event on December 7th and will take place at the Melbourne Arena in Melbourne, Victoria, Australia. AFC heavyweight champion Soa “The Hulk” Palelei (17-3) tweeted that he will be taking on former UFC heavyweight Sean “Big Sexy” McCorkle (16-3) in the main event.

Palelei is coming off a 12 second beatdown of Bob Sapp at the Cage Fighting Championship 21 event which took place in May. He has rattled off seven consecutive victories since losing to now top five heavyweight Daniel Cormier in November 2010. Palelei has fought exclusively in Australia except for his lone UFC appearance in which he lost to Eddie Sanchez via TKO at UFC 79 in December 2007.

McCorkle is coming off a TKO loss at the hands of Brian Heden in March of this year. McCorkle had rattled off six consecutive victories since losing his last UFC bout against Christian Morecraft in March 2011. McCorkle was (1-2) inside the UFC with the lone victory being a submission win over UFC and PRIDE veteran Mark Hunt at UFC 119.

More bouts should be announced in the coming weeks. Stay tuned to ProMMAnow (www.prommanow.com) for more AFC 4 news and coverage.

One thought on “Soa Palelei vs. Sean McCorkle set for AFC 4 on December 7th”