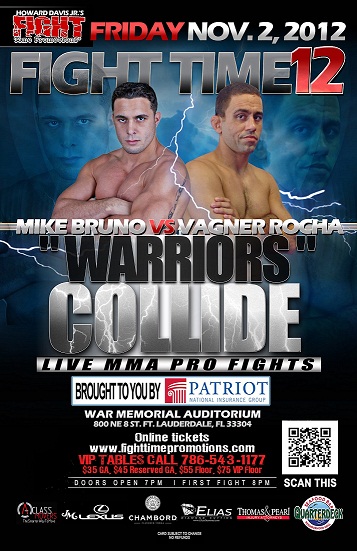 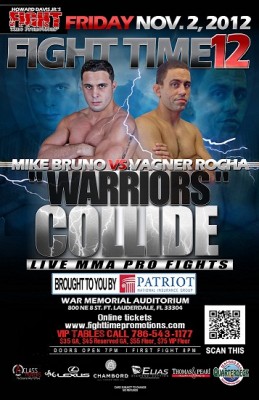 Howard Davis Jr.’s Fight Time Promotions will hold its final event of the year on November 2nd in Fort Lauderdale, Florida. The event will take place at the War Memorial Auditorium and will be headlined by a grudge match between Vagner Rocha and Mike Bruno. The fight will also be for the Fight Time Promotions/ISKA welterweight Florida championship title.

Rocha (6-3) and Bruno (10-4) have had verbal sparring sessions in the past and Fight Time Promotions wants to allow the two to settle their differences in the cage.

Rocha is coming off a TKO loss against Jonathan Brookins at a UFC on FUEL TV event in February. Rocha was (1-2) inside the octagon before being released by the promotion. Bruno trains with American Top Team and has won four consecutive bouts since losing to Mike Rio in September 2010.

Also expected on the card is Mike’s older brother Steve Bruno (12-5) who will take on an opponent that will be named at a later date. This will be the fourth Fight Time Promotions event of 2012, and the promotion has signed on for an additional five events in 2013. Ticket information can be found at www.fighttimepromotions.com with prices ranging from $35, $45, $55, $75, and VIP tables at 786-543-1177.