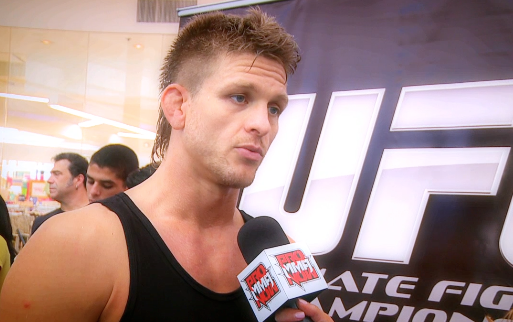 A new bout has been added to The Ultimate Fighter 16 Finale as Mike Pyle (23-8-1) faces James Head (9-2) in a welterweight matchup. The event is set to take place at the Hard Rock Hotel and Casino in Las Vegas on Dec. 15.

The fight was announced by Mike Pyle today via his Twitter page.

The Ultimate Fighter 16 finale will feature a headline bout between this seasons head coaches Shane Carwin and Roy Nelson. The main card will air on FX with the prelims expected to air on FUEL TV.

Mike Pyle is currently riding a two fight winning streak, most recently defeating Josh Neer via first round knockout at UFC on FX 3 in June. Prior to that he scored a first round TKO victory over Ricardo Funch at UFC 142 in January. Pyle’s most recent loss was against Rory MacDonald at UFC 133 in August 2011, where he suffered a first round TKO. Mike now has the opportunity to extend his current winning streak to three with a good performance against Head.

James Head is also on a two fight winning streak, most recently defeating Brian Ebersole via decision at UFC 149 in July. Prior to that he scored a first round submission victory over Papy Abedi at UFC on FUEL TV 2 in April, and dropped a third round submission to Nick Ring at UFC 131 in June 2011. A big win over Pyle will take James one step higher in the welterweight division.