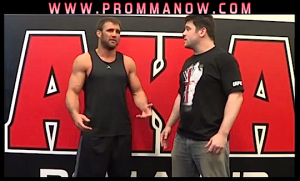 ProMMAnow.com (www.prommanow.com) resident old school MMA guru Dan “The Wolfman” stopped by American Kickboxing Academy recently to do some training and caught up with none other than “The New York Badass” Phil Baroni (14-14).

Baroni discussed working with the guys at AKA and also talked about how long he and “The Wolfman” have known one another and how they first met.

Baroni discussed his upcoming fight with Chris “The Hammer” Holland (4-3) which takes place this Saturday, June 2, at “Ring of Fire 43: Bad Blood” in Broomfield, Colo., and airs live on Fight Now TV (Event can also be ordered on Ustream for $7.95).

Baroni acknowledged he is at a crossroads in his career and really needs a win. He said he is not looking past Holland but is looking through him and mentions he will be fighting again just a couple weeks later at One FC (We now know he will be facing Roger Huerta in Malaysia).

2 thoughts on “Phil Baroni: ‘I’m at a crossroads in my career and I really need a win’”