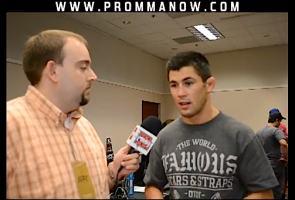 Cruz talked about his overall experience as a coach on the show and some of the challenges he faced in that role.  Cruz shared his thoughts on the Renan Barao vs. Urijah Faber match-up and how he sees the fight going. Cruz seems to be in favor of Faber winning the fight with Barao so they can meet once again and settle their unfinished business.

Without a dog in the fight, Cruz was able to give his prediction for the TUF Live Finale featuring Mike Chiesa vs. Al Iaquinta. Cruz discusses both fighters’ strengths and feels it will be a tough fight, but in the end believes Iaquinta will walk away the winner of The Ultimate Fighter Live on FX.

As far as when the champ might return to action, he still has not had knee surgery yet, but said the doctors told him he would be out approximately seven to nine months. Cruz said that means he will be back in six.