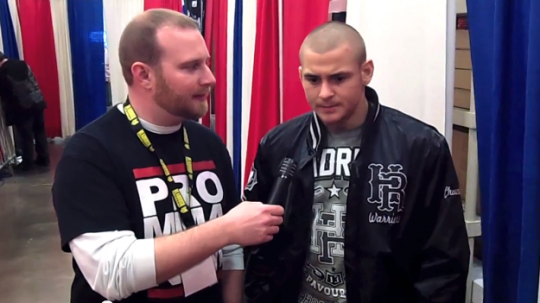 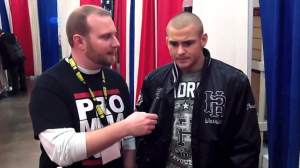 ProMMAnow.com‘s (www.prommanow.com) Brian Furby caught up with top-10 ranked UFC featherweight Dustin “The Diamond” Poirier (12-1) over the weekend at the Headrush booth at the 2012 Arnold Sports Festival in Columbus, Ohio.

Poirier talked about his relationship with Headrush, how they started working together and how well they treat him as a sponsor. “The Diamond” also discussed his upcoming fight with “The Korean Zombie” Chan Sung Jung, who he will face on May 15 at UFC on Fuel TV 3 in Fairfax, Va. He described the match-up:

“He’s a warrior and I’m going to test myself against him. I’m a warrior too. I think he’s going to bring the best out of me. We know he’s got a great chin. We know he likes to brawl and I think I have a pretty good chin and I like to scrap too. We’re gonna go in there and beat each other up. I think I’m a little bit more technical on the feet than he is, and when it hits the ground, we’ll see what happens there, but I’m going to beat him everywhere in this fight.”

Poirier, along with fellow UFC Louisiana fighter Tim Credeur, is part of a new mixed martial arts documentary entitled “Fightville” that is coming out in April. Poirier said the movie really shows who he is as a fighter and person and feels it will help educate more people about what MMA is really all about.

Stay close to ProMMAnow.com for more of our exclusive coverage from the 2012 Arnold Sports Festival brought to you by RioFightWear.com, the place to shop for all your mixed martial arts and BJJ needs .