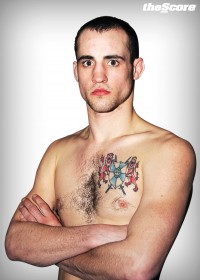 The matchup between Campbell (5-1) and Boyle (7-5), both winners of four of their last five fights, pits two of Canada’s most exciting, young, up-and-coming strikers against one another.

The 24-year-old, six-foot Campbell, comes from a strong lineage of kickboxing talent at Stoney Creek’s Iron Muay Thai, under master trainer Kru Alin Halmagean.  Since he made his MMA debut in June 2008, Campbell has taken on the grueling task of simultaneously maintaining his kickboxing career where he holds an overall record of 45-10 (11 KO’s).

Campbell’s opponent, 27-year-old, six-foot Boyle (7-5), has earned more than half of his victories by KO.  He is coming off an incredible flying knee KO of Alex Popov in September.

Dickson (2-0) is the prize student of local MMA icon Jeff Joslin, the first and only Hamiltonian to date to fight in the UFC.  The 22-year-old prospect claimed both his victories to date by way of submission.

St. Jean, 27, (5-3), who fights out of the Ottawa Academy of Martial Arts under Pat Cooligan, has proved to be one of the more durable fighters in the sport after competing seven times in 2011.  All five of St. Jean’s career wins have come by way of either KO or submission.

St. Jean is hungry to return to the win column after his five-fight win streak was snapped in his last start at the hands of Brandt Dewsberry, who submitted St. Jean with a triangle choke in the second round of their meeting last October.

Tickets for The Score Fighting Series start at $30 and are on sale now at the Copps Coliseum box office and online at www.ticketmaster.ca.

In the main event, UFC and PRIDE veteran and Xtreme Couture team member John “The Natural” Alessio (33-14) will square off with Strikeforce and WEC veteran and Team Quest member “Diamond” Ryan Healy (19-9-1). For more on Alessio, check-out this video feature from theScore.com.

In a featured welterweight bout, UFC veteran Forrest “The Meat Cleaver” Petz (24-9) of Cleveland, Oh. will take on kickboxing champion Sergej Juskevic (11-6-2) of Toronto via Lithuania.

Additional fights will be announced soon.