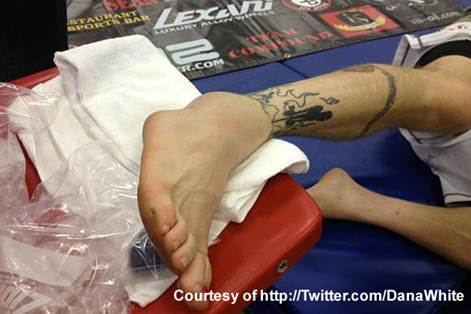 Los Angeles, CA (USA): Last night, Sean “The Destroyer” Loeffler was supposed to make his long-awaited Octagon debut against Buddy Roberts at “UFC on Fuel TV 1.” Unfortunately, Loeffler suffered an ankle injury while warming up and the doctor would not clear him to compete in the fight.

So, what exactly happened? “I was doing ‘tuck jumps’ backstage,” says Loeffler. “My foot got caught in a crack in the warm-up mat, and it rolled over and snapped in half. Trevor Wittman and Urijah Faber were there…the whole locker room heard it pop.

“Fortunately, the ankle’s not broken. It’s a 3rd degree fibula/tibia strain. There’s about a 50/50 chance I’ll have surgery, but we won’t know until after I get an MRI. I don’t know how long I’ll be out, but Joe Silva has told me that I am 100% a UFC fighter, and that I’ll be back with them.”

As was reported by multiple media outlets last night, Loeffler was paid his “show” money by the UFC. “Yes, it’s true,” he says. “I very much appreciate that. I’d like to thank Dana White, Joe Silva, and the rest of the UFC for standing by me through this. They paid me my show money even though I got injured. I appreciate that so much, and I won’t forget it. And to the fans, I will be back, better than ever, as soon as possible. I’m in the UFC to stay, and even though the ankle injury sucked, it shows that everything I do will always be memorable…ha.”

As far as what’s next, no one can know for sure. Will Loeffler fight Buddy Roberts when he gets back? “As far as I know, Buddy is healthy, so I doubt they’re going to make him wait for me. I have no idea who the UFC wants for me next, but regardless, I need to get healthy and then we’ll deal with it. I was ready for Buddy, so if he’s next, I will be ready for him again.”