Is Wing Chun effective against a larger opponent? 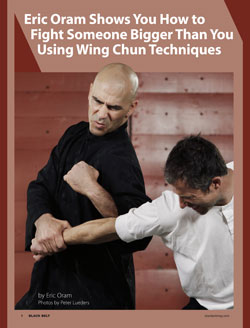 (Valencia, CA) — Some martial arts practitioners begin martial arts training to learn how to defend themselves against larger opponents or street assailants. But what happens to the practitioner who studies the forms and self-defense techniques but still feels like something is missing?

“If you have to engage a larger opponent, you have to get inside his reach to create a level playing field,” Eric Oram says. “Functioning at close quarters will probably be unnerving for [the opponent] and cause him to pull back into a more comfortable zone. Follow him relentlessly, keeping him on the defensive.”

In BlackBeltMag.com’s new FREE Guide — Eric Oram Shows You How to Fight Someone Bigger Than You Using Wing Chun Techniques — wing chun expert Eric Oram demonstrates how three self-defense techniques can be used to maintain distance and control to defeat a larger opponent. In addition to these wing chun techniques, Eric Oram also provides an overview of basic wing chun concepts.

Mastering these primary principles will enable martial arts practitioners to understand exactly how a traditional martial art like wing chun kung fu can be effective against larger opponents in modern street combat.

BlackBeltMag.com’s new FREE Guide — Eric Oram Shows You How to Fight Someone Bigger Than You Using Wing Chun Techniques — is now available for instant download at blackbeltmag.com/free-guides.

One thought on “Is Wing Chun effective against a larger opponent?”