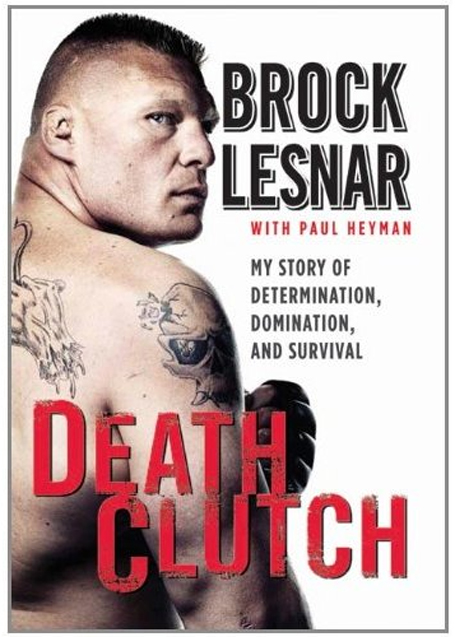 I picked up a copy of former UFC heavyweight champion Brock Lesnar‘s “Death Clutch” this past Thursday at Borders for $28.46, including tax. It is quite the page-turner. After two or three sittings, I finished it this morning at about 7 a.m.

In full disclosure I should let you know that I am a pretty big Brock Lesnar fan. And I’ll be honest, I had never heard of him before he came to the UFC. I had not followed pro wrestling since I was a very young kid. However, I was a huge fan as a kid, went to quite a few live local NWA shows in Nashville, Tenn., and Jerry “The King” Lawler was like a god to me.

Then I turned 13, discovered break-dancing and forgot all about pro rasslin’. I will also admit, in the last year or so I have found myself getting a bit back into it because of the crossover between MMA and pro wrestling, and watching guys like Frank Trigg and Jeremiah Riggs make the transition from fighter to entertainer. I’m really enjoying this season of Tough Enough and I find the business and history of pro wrestling fascinating.

Brock devotes a large part of “Death Clutch” to his time with the WWE, life on the road, his professional relationship with other wrestlers, the politics of the business and his relationship with pro wrestling’s ringleader, Vince McMahon.

According to Brock, much of his time with the WWE was a blur due to his large consumption of booze and painkillers. He even apologized in the book for not having more stories from that part of his life to share because he said honestly a lot of it was just a haze.

He does talk about several of the most important matches in his wrestling career and does a good job detailing his time with “The Federation”.

Brock also does a good job of making Vince McMahon look pretty bad and painting a picture of a heartless slavedriver or cult leader. He details much of the politics involved behind the scenes that ultimately helped sour him on the business.

However, Brock does thank Vince at the end of the book and a couple of hints were dropped throughout the book that led me to believe there was a possibility he could return to the WWE one day — even if it was just for one final Pay-Per-View finale.

There is one thing very clear in “Death Clutch,” and it is that Brock’s family is extremely important to him. And it was his desire to spend more time with his family, combined with the demanding pro wrestling lifestyle that ultimately led to Brock leaving the WWE.

After leaving the WWE, Brock details his experience getting in “football shape” and trying out for the NFL. One thing I did not know is that a short time before the day of tryouts, Brock was involved in a motorcycle wreck that severely tore his groin.

The guy was not even at full steam during tryouts and still was the last person to be cut from the squad. That’s impressive for a guy who had not played football since high school.

Brock was involved in a lawsuit with the WWE after he left. In bad judgment he had signed a no-compete clause that would not allow him to fight or wrestle for another company until 2010.

He spent a ton of money fighting the WWE to get out of it, but he ultimately won. He covers all the details about the lawsuit in the book. At one point, he actually considered going back to the WWE and even met with Vince to discuss terms but they wanted him to start from ground zero — not Brock’s style.

Brock then began his transition into mixed martial arts. He wanted to fight in the UFC but needed to get some experience first.

He signed a deal with K-1 and almost fought Hong Man Choi, but ended up facing Min Soo Kim and ran through him in 69-seconds.

Brock explains how he bought tickets to a UFC event for he and his lawyers and approached UFC President Dana White for the first time about fighting. White gave him a meeting that very night and agreed to give him a shot.

Brock’s UFC debut was against Frank Mir, and it is a match that still irks the big guy:

“I know I handed Frank that victory. I gave it to him. He didn’t deserve to win. He’s not a better fighter than I am. On his best day, he’s not half the athlete I am on my worst. I gave him my leg on a silver platter, just handed him that submission. That was my loss, not Frank’s win. I screwed up. … Losing to Frank Mir was one of the worst moments of my life, because I lost to someone who simply did not deserve to beat me, let alone even be in my Octagon.”

His next fight was against Heath Herring. Herring was 28-13, 1 NC coming into the fight. Brock was 1-1. In the first punch of the fight Brock hit Herring with a punch that knocked him a backflip and broke his orbital. Brock pounded on him for three rounds and Herring never fought again.

“I’m sure to his friends and family, Heath is an ‘okay guy,’ but I just didn’t like him. I’m sure that Heath Herring doesn’t like me, either…after all, I broke his face. … I won a unanimous decision for my first victory in the UFC. Heath Herring has never fought again.”

In just his third UFC fight Brock was awarded a shot against MMA legend Randy Couture for the UFC heavyweight title. He knew the hard-core fans did not think he deserved a shot, but he was not going to turn it down:

“A lot of hard-core UFC fans resented the fact that I was being given a title shot in only my third UFC fight, my fourth MMA fight overall, but my attitude was very simple. Screw them. Only a fool would turn down a chance to fight Randy Couture for the UFC Heavyweight Championship in Las Vegas. What was I supposed to do” Say ‘no thank you’? ‘Oh gee, Mr. White, I’m not worthy’?”

After winning the title, he got a rematch with Frank Mir in the UFC 100 main event. Leading up to the bout Frank talked a lot about how he had submitted Brock in their first fight. As far as Brock was concerned he had given that first fight to Frank and he could care less about his BJJ black belt:

“Frank claimed he was this great juijitsu black belt. What a crock of [expletive]. Hey let’s face facts…when it comes to juijitsu, the truth is that a black belt doesn’t mean a damn thing to me. Black-belt-[expletive]-schmack-belt. I’m a white belt, but I beat a black belt at his own game. Shouldn’t that make me a black belt?”

After defeating Mir on the biggest UFC card of all time, Brock gave his infamous “UFC 100 Bud-Light speech”:

“Everyone got a taste of Brock Lesnar that night. Unfiltered. I said what was on my mind. No script. No bull-[expletive]. Some liked what they heard, others didn’t. I don’t care.”

It is also at this juncture of the book, Brock gives his take on wrestling vs. jiu-jitsu and certain BJJ black belts:

“Sorry, everyone, but guys like Frank get awarded black belts based on how many hours they spend in the dojo. The belts come from the guys’ own instructors. They don’t have to beat anyone in a real fight in order to win them. My coach didn’t give me the NCAA Division I Heavyweight Title. I earned it. My training staff didn’t award me the UFC Championship either. I earned both by kicking someone’s ass for the honor of being champion. I deserved to be recognized as the best by beating someone man-to-man, in the spirit of competition. Frank got his black belt because he paid the instructor a lot of money over the years and put in his time. Big deal.”

Between his fight with Mir in July 2009 and his fight with Carwin in July 2010, Brock was diagnosed with diverticulitis. He goes into great detail about the whole ordeal, the health care in Canada and how he ultimately recovered and was able to come back and defend his title against Shane Carwin.

At one point when he was in the hospital he was jacked up on painkillers and his future looked bleak. He actually decided to retire:

“Rena just kept telling me to focus on positive thoughts, but while I was there in that hospital bed, I decided to retire. One of the people I called on the phone was Dana White. He’s the one guy who laughs about the calls from me when I was in the hospital. That’s just Dana’s personality. I like that about him, because I’m sure he got an earful from me that week and a half I was laid up. I do remember telling Dana I was retiring.”

He also at one point while in the hospital called up everyone he worked with, his trainers and coaches, his lawyers, and fired his whole team.

Once he felt better and got out of the haze of the pain medication he was able to repair those relationships and he looks back on it and laughs now.

There were several points in the book I found myself laughing out loud. That, combined with the fact I read the whole thing in a couple of sittings is rare for me with a book.

Whether you are from the pro wrestling world or the MMA world, Lesnar fans should enjoy the book. You will learn about what makes Lesnar the way he is, the way he ticks. I’ve tried to include as many highlights as I could here, but there are plenty  more, like the story of  when he got the sword tattoo on his chest.

He also hints at a “Death Clutch” part two. Maybe some day. It’s my guess those chapters are still to be written.

Here is one thing I’m pretty certain of after reading this book. Brock Lesnar will not remain in the MMA game forever. He will not be a Randy Couture. That’s not his style. When he does something, he does it big.

He gets in to get out.

So enjoy the show while you can.

Brock had not even watched his fight with Cain Velasquez at the time of publication and he feels he never should have taken the fight at the time he did.

His complete focus was on defeating Junior dos Santos and then getting the UFC heavyweight title back. However, with a return of diverticulitis, and subsequent surgery, Lesnar will likely be out of action until early 2012.

Some memorable segments from “Death Clutch”: