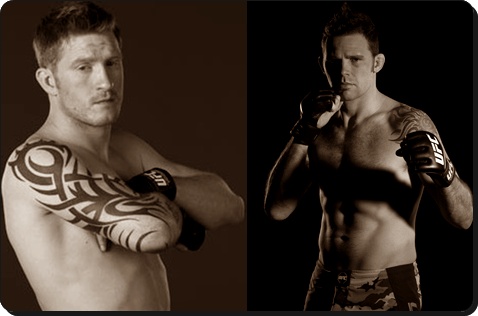 It seems to have gotten lost in the shuffle a bit, but the TUF 13 finale is upon us this weekend so we’ll be taking a look at the main card matchups that will air on Spike TV on Saturday night.

Ed Herman comes into this fight off a lengthy layoff due to an injury sustained in his last fight at UFC 102 against Aaron Simpson. That bout took place in August of 2009. Herman has a career record of (19-7) with 12 wins via submission and 5 wins via TKO/KO. The TUF 3 finalist has a good chin, is durable, and is fairly well rounded as he was showing improvement in his standup game prior to the injury that sidelined him. If there’s a knock on Herman, it’s that he has been submitted in 4 of his 7 career losses, granted they were all against guys with very good ground games as he is versed in submissions as well.

Tim Credeur has been on the mends as well as he has had to pull out of a couple of fights since his last outing inside the octagon, a loss in a standup war to Nate Quarry in September 2009. Credeur has an overall record of (12-3) with 8 wins via submission and 4 wins via TKO/KO. Credeur is a black belt in jiu-jitsu and has applied that discipline very well into his MMA game as evident in the number of submission wins. He displayed how durable he was in the bout with Quarry, which was the very first time he had ever gone to decision in his MMA career.

The key for Herman will be to dictate where the fight takes place, he usually has good takedowns but he’ll probably need to keep this fight standing. If he does go for a takedown it should be late in the round, only giving Credeur a small window to work his submission game. Credeur can probably adapt to wherever the fight goes. He can stand and bang or work his submission game if Herman decides to take him down.

This is a very interesting fight because it’s difficult to predict what each fighter will bring to the cage since they both have been out of action for quite some time. Lots of questions for both fighters coming into this one. How will Herman’s cardio hold up since his knee injury and will both fighters be rusty due to time away from the cage?

If I had to make a prediction, I would say that Credeur will submit Herman because Herman seems to find a way to get himself into trouble on the ground in the past. However, he may have tightened that hole up in his game during his time away from competition. I suppose we’ll find out on Saturday night! Be sure to keep checking back as we’ll preview the other fights on the main card each day.