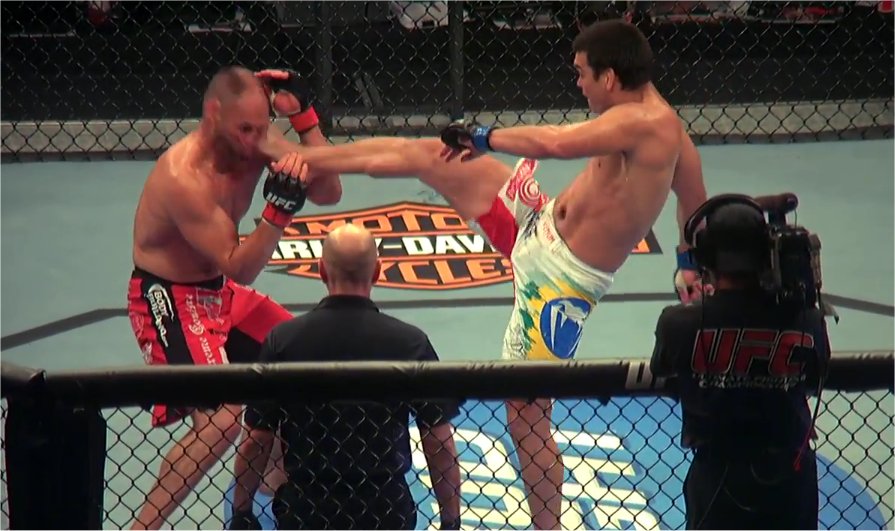 TORONTO – A record $129,000 was given out for “fight night” bonuses to Lyoto Machida, Pablo Garza, Jose Aldo and Mark Honinick after Saturday’s “UFC 129: St-Pierre vs. Shields” event.

Lyoto Machida was awarded “Knockout of the Night” honors for his highlight-reel front-kick knockout of MMA legend Randy Couture. The stunning and sudden KO not only ended the bout, but also the career of the retiring Hall of Famer. Couture later said at the post-fight press conference that he thought he had got caught with a punch. The fight-ending kick also dislodged a tooth from Couture.

In early action, Pablo Garza found himself in a back-and-forth affair with fellow featherweight Yves Jabouin. Jabouin landed several staggering leg kicks that sent Garza to the mat, but “The Scarecrow” remained calm, got back to his feet and then pulled off a flying triangle choke that left Jabouin tapping out in the very first round. The slick submission resulted in Garza winning the “Submission of the Night” award.

In the co-main event, Jose Aldo and Mark Hominick battled for twenty-five action-packed minutes en route to being awarded “Fight of the Night” honors. Aldo dominated early, punishing the lead leg of Hominick with monstrous leg kicks, then inflicting serious damage from the top in the later rounds. A late rally by the bloodied and swollen Hominick resulted in the challenger getting a take down in the final round, where he left it all in the Octagon trying to put away the champion with ground-and-pound from the top. In the end it wasn’t enough to unseat the UFC featherweight champion, as Aldo defended his UFC title successfully for the first time with scores of 48-45, 48-46 and 49-46.