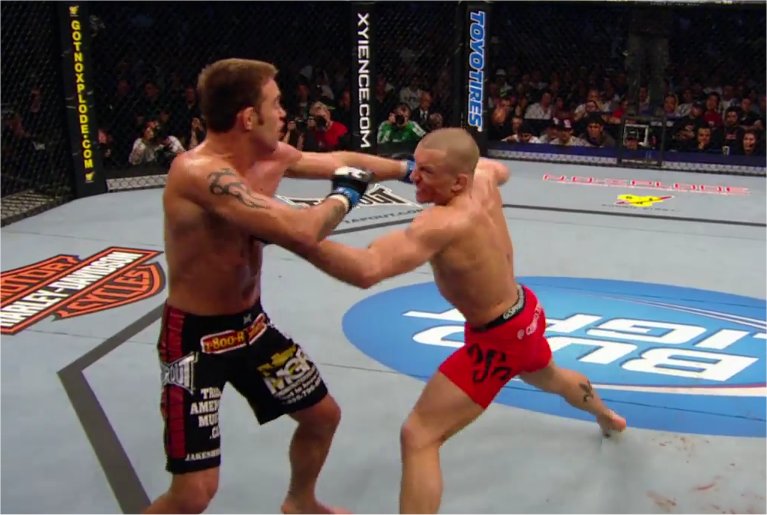 TORONTO – A record 55,000 fans gathered at Toronto’s Rogers Centre to see their national hero defend his title against Jake Shields. The champion didn’t disappoint his home crowd, but it did take him a full five rounds to earn yet another successful championship defense.

His critics are likely not impressed by his performance, as the win marks five out of the last six fights for “GSP” to go to decision.

As expected, Georges St. Pierre used his jab to keep Shields at bay for much of the bout. The strategy worked to perfection, as Shields failed to secure a single take down against St. Pierre. Shields effectively used his kicks and jabs, displaying marked improvement in his stand up, but after one round in the books, it was clear that he would have to do something different if he wanted to take the title from the champion.

Between rounds, the corner of St. Pierre urged him to throw the overhand right to counter the jab of the challenger. St. Pierre obliged, and landed a looping right hand that staggered Shields midway through the second stanza. St. Pierre pressed forward and caught Shields closing the distance with a jab that sent the challenger to the canvas momentarily.

A bewildered Shields recovered nicely but had no answer for the quickness and accuracy of the champion. Despite the lack of execution in the take down game of Shields, the challenger did manage to inflict some damage to the left eye of the champion. St. Pierre was visibly irritated by the mouse under his eye telling his corner he was having trouble seeing out of it.

Despite the concerns of St. Pierre about his eye, he managed to make the third look much like the first two rounds. St. Pierre mixed it up a bit near the end of the round, adding a take down of his own with about 10 seconds to go.

The fourth played out like the previous rounds until St. Pierre caught Shields with a head kick that dropped him to the canvas. Shields quickly recovered, and managed to inflict some damage with his own punches, bloodying the face of “GSP.”

Shields failed to show any sense of urgency in the final round as St. Pierre continued to feed him jabs throughout the final five minutes. In the end, St. Pierre retained his title with a unanimous decision victory (50-45, 48-47, 48-47), but acknowledged that Shields was better on his feet then expected.

“His striking was much better than I thought,” said the champion. “He closed my eyes. Standing up, I was expecting to beat him more with ease and then put him down later in the round, but I couldn’t deliver much like this. I’m sorry to the fans. I wanted to make a knockout or submission tonight.”

St. Pierre moves to 20-2 overall, and extends his current winning streak to nine victories. The loss for Shields ends his own fifteen-fight win streak which spanned 6 years.

Jose Aldo and Mark Hominick promised to put on a show for the 55,000 fans in attendance, and they did just that.

The two warriors battled for twenty-five action packed minutes to determine who would walk away as the champion.

It was a quick start for Aldo who wasted little time attacking the lead leg of Hominick. The champion continued to attack as Hominick pressed forward, putting together lightning-quick combinations of left hooks to the body and stinging leg kicks. Aldo had it all working, even mixing in a take down in a dominating first round.

In the second round, a much more relaxed challenger started to find his rhythm. Hominick mixed in multiple punch combos and started to establish his jab. Aldo responded, countering with a leaping left hand and more leg kicks. Once again, Aldo was able to secure a take down and then used short, grinding elbows to the face of Hominick. After a stall in the action, the fighters were stood up and the damage from the elbows were apparent as blood started flowing from the cheek of Hominick.

In the third round, the challenger started to turn the momentum, consistently landing jabs and right hands, along with left hooks to the body of Aldo. Hominick also was able to stuff the take down attempts of the champion, and the crowd responded with roaring applause for their hometown hero.

Just as Hominick looked to be on his way to getting back into the fight, the champion countered and landed a huge right hand that sent Hominick reeling toward the canvas. Aldo landed several hammerfists from the top as the bell sounded on the third stanza.

The fourth round saw both guys landing exchanges, but the difference in the round was the leg kicks from the champion. Hominick was wobbled as yet another stiff leg kick to his lead leg landed. Hominick stayed true to his jab, doubling it up, but soon found himself on his back after a big right hand landed from Aldo. Aldo commenced to punishing Hominick with elbows, causing an insanely huge hematoma to form on the forehead of the challenger. The action was stopped for the doctor to have a look, and when asked if he wanted to continue, the challenger unhesitatingly answered “yes.”

Aldo continued to punish Hominick in the final round, but after a big uppercut landed for the champion, Hominick managed to shoot and secure a take down of his own. The challenger remained on top for the rest of the fight, landing big left hands, and punches to the body of Aldo, but in the end it was not enough to take the title from the champion.

After twenty-five minutes of action, the scores were in (48-45, 48-46, 49-46), and Jose Aldo remains the UFC featherweight champion with the unanimous decision victory.

We’ve heard it before, but Randy Couture has been adamant that this fight with Lyoto Machida would be his last. Machida on the other hand, had said that fighting Couture would be an honor, and a dream come true.

The dream truly became reality for “The Dragon.”

Machida gave Couture fits with his elusiveness, staying out of danger of getting ensnared into the clinch game of the Hall of Famer throughout the first round. Machida used a snapping jab, and picked his spots to land sharp right hands when he did engage. Couture remained patient, and when he committed to changing levels, Machida landed his patented knee as he came forward.

In the second round, Couture remained patient, but still struggled with the range of Machida. As they took the center of the cage, Machida faked a leg kick, and then landed a stunning jumping front kick that landed flush on the chin of the Hall of Famer. Couture was out on impact, and it was a climactic end to not only the bout, but also the career of Randy Couture.

After Couture made his way to his feet, chants of “Randy, Randy” erupted throughout the venue. When asked by Joe Rogan if this truly was the last time fans would see the legend in the Octagon, Couture didn’t hesitate in his reply.

“No, your not going to see me again, this is it,” said Couture.

With the victory, Machida stops a two-fight skid, improving to 9-2 in the Octagon and 17-2 overall. The loss drops Couture to 19-11 in his illustrious MMA career.

What can you say about Vladimir Matyushenko? After the 40-year old veteran got dominated by UFC light heavyweight champion Jon Jones, many thought that “The Janitor’s” best days were behind him.

Tonight against Jason Brilz, he needed only 20 seconds to prove that he will be around for just a little while longer in the UFC’s light heavyweight division.

Matyushenko landed early with a big combination, then as Brilz looked to engage, “The Janitor” staggered Brilz with a short uppercut, then dropped him with a follow-up left hook.

As Brilz went down, Matyushenko (26-5 MMA) followed, and put him to sleep with an additional two hammerfists. The impressive finish improves Matyushenko’s UFC record to 4-1 since his return to the organization.

Benson Henderson still had some aggression left in his body after being posterized by Anthony Pettis at the end of their championship bout back in December of 2010.

Tonight he took it out on Mark Bocek.

Bocek managed a late take down toward the end of the first stanza but ran out of time before he could pass to a dominant position.

In the second round, Henderson started off firing a punch/kick combo, and Bocek capitalized on a take down opportunity, driving Henderson into the cage. Henderson stayed aggressive, landing elbows to the body of Bocek, but soon found himself on the wrong end of a slam to the mat. Bocek was unable to mount any type of offense from the top before Henderson managed to make his way back to his feet.

After a Henderson take down, Bocek used a leg lock attempt to make his way back to his feet, then after locking up a front headlock, snapped Henderson down to his knees and looked to finish with an anaconda attempt.

The slippery Henderson managed to turn into Bocek and look for a leg, while Bocek re-adjusted his grip and went to his back for the guillotine. Henderson recognized the danger immediately and rolled out of trouble and back to his feet. Once there, Henderson responded immediately with brutal knees to the body and a flush elbow that sent blood gushing from the top of the head of Bocek at the end of the round.

Behind on the scorecards coming into the final stanza, Bocek immediately shot and earned a take down. Bocek scored with short elbows from the top, but Henderson used an armbar attempt to scramble out and reverse position. Bocek once again went for the leg, and Henderson appeared to be in trouble with his leg bent grotesquely behind his body, but once again he used his knack for working out of tough positions to get back to his feet and then score a take down of his own. At the bell, Henderson let it all go, throwing with reckless abandon, putting an exclamation point on an outstanding performance.