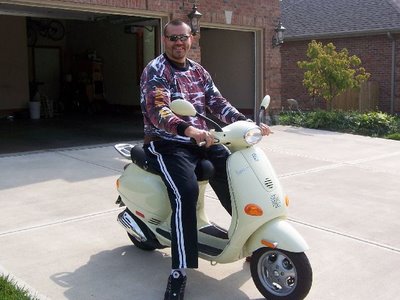 If you’ve ever tripped on a sidewalk in front of a large crowd of people, farted in your cubicle without the obligatory cover-up cough, or been caught picking your nose in public, this one’s for you.

Mixed martial artists can be pretty intimidating when they so choose. Admittedly, most all of the fighters I’ve met have been extremely nice and cordial. Still, there’s something emasculating about standing across from someone who could beat you up without breaking a sweat and impregnate your girlfriend and steal your XBOX before you even get discharged from the hospital.

But even for these modern day gladiators, sometimes acting tough isn’t as easy as it looks. It hit me in the middle of one of Josh Koscheck’s painfully forced trash talk moments during season 12 of The Ultimate Fighter. In an effort to convince himself that he’s going to kick Georges St. Pierre’s ass and/or sell tickets and pay-per-views, Koscheck was in the middle of his usual song and dance when … something happened.

It was subtle and you might not’ve picked up on it right away. But in the middle of trying to sound hilarious, cool, and intimidating at the same time, Koscheck realized he didn’t have much to say. His facial muscles and mouth were at attention and ready to keep going, but his brain had run out of ideas. Thankfully the editors at Spike TV kept the cameras rolling and, desperate to put a period on his rant, Koscheck cracked a forced smile reminiscent of a munchie-craving stoner staring at the Frito Lay products in the snack food aisle of a local convenience store. Then he made a clicking sound with his mouth. I’m not sure if he was being clever or trying to summon a horse.

Anyway, that got me thinking. What about all of those times that a post-fight interview has taken a turn for the worse, creating a cringe-inducing, side-splitting moment of laughter for everyone witnessing the train wreck? Or how about when someone unleashes a bowel movement in the middle of a fight, or a father brings his young children into the ring after a bout to stare at his freakishly deformed face? Without further ado, it’s time to take a trip down memory lane and recount some of the most socially awkward and unintentionally hilarious moments in mixed martial arts history both in and out of the cage.

19) Former light heavyweight champion Rashad Evans isn’t just a fighter. Before he fought Quinton “Rampage” Jackson in 2010, we found out that he has hobbies that include spelunking … in Rampage’s bootyhole.

18) Is it cold in here? Because Georges St. Pierre is having trouble keeping his nipples calm. (UFC 87)

17) A lot of times MMA commentators make their job look easy. Okay, no they don’t, but at least they speak in complete sentences most of the time. And then Afflicition brought on former UFC champ Tito Ortiz in 2009 to provide some expert analysis.

16) Win or lose, you should always leave it all in the cage. If that means barfing up your last three meals, so be it. Eder Jones certainly didn’t hold back after his Nov. 13 victory.

15) Longtime fans had always wanted to see top-level brawlers Chuck Liddell and Wanderlei Silva square off, but negotiations never seemed to work out. Finally, prior to UFC 61, it looked as if PRIDE and the UFC could work together. Of course, the plan ultimately fell through and we had to wait until the following year, and Zuffa’s purchase of the PRIDE organization, for Liddell vs. Silva to happen. Nevertheless, it was an exciting moment, seeing Silva step into the cage and tell fans what we always wanted to hear: That Silva wanted to fornicate with Chuck. Wait, did I say fornicate?

14) Speaking of Liddell, the post-TUF explosion saw him emerge as one of the faces of the sport. But his media interviews didn’t always go swimmingly. Daytime television is boring, but that probably doesn’t explain why Liddell couldn’t stay awake for this TV spot from about five years ago.

13) Houston Alexander vs. Kimbo Slice. Two action-first, aggressive brawlers. That should mean fireworks, right? Not so much. Instead Alexander spent most of the time skipping around the cage to try and stay out of range of the bigger Slice. By the end of this fight at the TUF 10 Finale last year, both guys were exhausted and barely able to move. If you watch closely, even referee Josh Rosenthal couldn’t help but facepalm after what he’d just seen. 12) Japanese MMA veteran Dokonjonosuke Mishima (say that five times fast) picked up a win in 2008 after his release from the UFC and wanted to celebrate the way only a few select, extremely athletic fighters can: doing a backflip off the turnbuckle. Only problem is, instead of landing on his feet, he performed a full on belly flop. A few more feet back and that fancy trophy he won would’ve prevented him from ever impregnating a woman.

11) The first Ultimate Fighting Championship event really broke new ground in 1993. Some of the combatants probably had no idea what they were getting into. That includes former professional boxer Art Jimmerson. I guess Jimmerson knew he might need a free hand in case that whole “no holds barred” thing caught him by surprise. Still, what respectful fighter wouldn’t want to pay homage to their primary discipline? Royce Gracie wore a gi. So Jimmerson decided he’d try and get the best of both worlds. One free hand, one boxing glove. For some reason, it never caught on. Maybe that’s because he was submitted in a matter of minutes and never fought under MMA rules again. 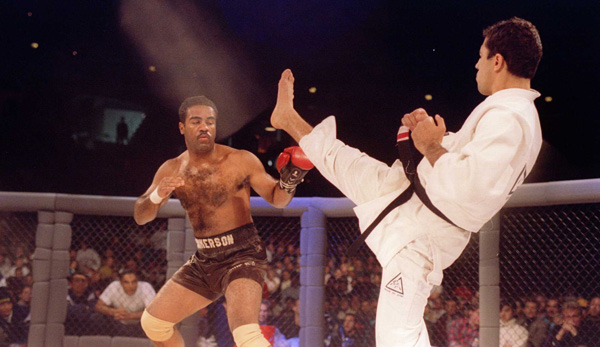 10) No self respecting guy likes sloppy seconds. It doesn’t matter how hot the girl is. As men, we don’t want to know where you’ve been and only hope the list of your conquests is short enough that we don’t accidentally run into any of your previous bed buddies. Why? This is why. Tim Sylvia may have beaten Andrei Arlovski in two of their three matches in the UFC, but Arlovski had scoreboard in V-town once Syvlia was rumored to be involved with Arlovski’s former girlfriend. So, Tim, Andrei asked you in 2008 and still wants to know what you thought of the flavor of his wangus.

9) It’s up to a responsible parent to know when they should let their children watch MMA. Let’s be honest, it’s a violent sport. But letting your kids come up to see you in the ring right after you get your face rearranged by heavyweight legend Fedor Emelianenko in 2006? Probably not Mark Coleman’s best idea.

8) The Ultimate Fighter Season 6: Team Hughes vs. Team Serra. Team Hughes coach Marc Fiore would do whatever he could to make sure his fighters felt comfortable cutting weight. ANYTHING! (wink)

7) Maybe he was injured or maybe he was pissed off with his current UFC contract. Or maybe Kalib Starnes lost the will to stand and trade with Nate Quarry at UFC 83. He does hit kinda hard, after all. Whatever the reason, his publicized and ridiculous retreat inspired the creation of a popular MMA blog. So he’s at least got that going for him!

6) UFC President Dana White doesn’t care what it takes. He only wants the best of the best in the Octagon. If that means beating those guys off, then dammit he’ll beat them off! Wait a minute … (From TUF 8)

5) Mr. Sylvia makes his first official appearance on the list. Pepto Bismol moments can happen when you least expect them, and Sylvia probably didn’t realize he’d lose control of his number twos right in the middle of his fight in 2006 against Assuerio Silva. Special thanks to Silva for trying to hold on to full guard with Sylvia standing up, thus pulling down Sylvia’s shorts and showing the goods. 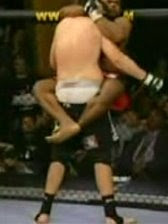 4) A special notice to all men: please don’t kiss Heath Herring. At K-1 Dynamite!! 2005, Yoshihiro Nakao found out the hard way what happens if you do cross that line. FYI, HERRING AIN’T GAY!

3) I’ll be honest, I’m not entirely sure which UFC event this post-fight interview comes from. Whether it was in 2005 or 2006, heavyweight veteran Paul Buentello learned that you don’t ask the crowd to recite your catchphrase when they have no idea what the hell it is.

2) Welcome back to the list, Mr. Ortiz, and a special introduction for UFC Hall of Fame member Ken Shamrock. You can take the fighter out of the WWE, but you can’t take the WWE out of the fighter. If you mess with Ken, he’ll beat you into a living death! Or he’ll just kick the crap out of a chair.

1) There’s really only one moment that deserves to be on the top of this list. Jimmerson had his one glove, but Harold Howard made damn sure that if you were coming on, you were coming on! Awesome video complete with some of Howard’s fighting “highlights” and a killer soundtrack.

8 thoughts on “Hilarious socially awkward moments in MMA: when acting like a badass goes horribly wrong”