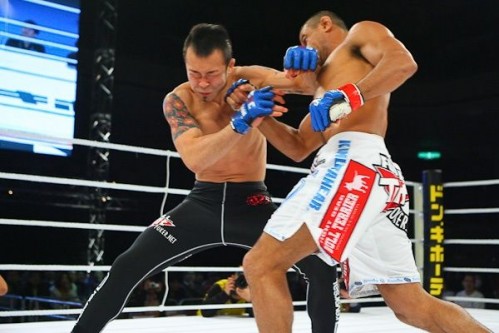 Sengoku Raiden Championship has added the biggest possible featherweight fight outside of the UFC to their end of year event. SRC champion Marlon Sandro will defend his title against Hatsu Hioki at “Soul of Fight.” The martial arts festival will take place at Ariake Coliseum in Tokyo on Dec. 30.

In his last fight, Sandro knocked out Masanori Kanehara in only 38 seconds to claim the SRC title. He has also been the featherweight King of Pancrase since besting Masaya Takita in 2008.

Hioki fought his way into the finals of the Sengoku featherweight tournament in 2009. However, he suffered an injury in his semifinal victory over Kanehara and could not compete in the final. He returned and dropped a controversial decision to tournament runner up Michihiro Omigawa. In 2010, he defeated Tekeshi Inoue to claim the Shooto world 143-pound title and quickly submitted Jeff Lawson.

World Victory Road, the parent company behind SRC, has also announced a return fight for middleweight Kazuo Misaki. He will take on Mike Seal who is coming off a loss to Timothy Woods at UWC 8.