Because it clearly helped Anderson Silva so much, Lyoto Machida is also training with Sensei Steven Seagal 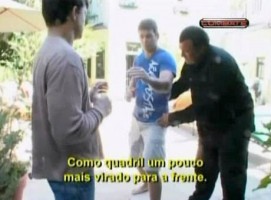 Because his friend and training partner, Anderson Silva clearly had so much success using the Sensei’s techniques in his fight with Chael Sonnen, Lyoto Machida has also decided to enlist the training help of one of martial arts’ all time greatest… actors, Sensei Steven Seagal.

While Seagal is actually an Aikido 7th-dan black belt, the reincarnation of the treasure revealer Chungdrag Dorje and makes one heck of a fine deputy sheriff, it is very questionable whether or not any of his Aikido-style teachings will translate to a real MMA fight. Traditionally, we have never seen anyone at a high level in MMA using Aikido.

That does not mean it could never happen, in fact. maybe it is the future. What do you say ProMMAnow.com readers? Is Lyoto and Anderson on to something here, are they just having fun, or are they just wasting their time? As long as they don’t get involved with any sex slave trafficking, there’s probably not much harm in them playing around with the Sensei, right?

Then again, when you consider a Mo Lawal or Brock Lesnar would basically nullify all this stuff with a single takedown (just like Sonnen did to Silva), this is time that could be used improving their wrestling. Machida takes on Quinton “Rampage” Jackson this weekend at UFC 123.

2 thoughts on “Because it clearly helped Anderson Silva so much, Lyoto Machida is also training with Sensei Steven Seagal”