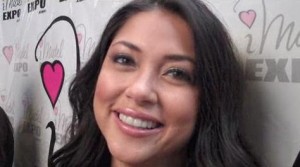 If you can get past the interviewer here sounding just a wee bit creepy and jumping from topic to topic like he forgot to take his Adderall, it’s always a pleasure to spend a few moments in the presence of perfection.

UFC Octagon girl Arianny Celeste talks about the upcoming November Playboy edition in which she will grace the cover. She talks about how the opportunity to pose for Playboy came about as well as her thoughts on the photos.

For those who have always wondered about Arianny’s ethnic background and what type of exotic genes have come together to form such a creation, the Octagon queen reveals her unique ethnic make-up.

Also, Miss Arianny says if there is some place she could go with the UFC where they have not yet been, she would like to go somewhere in Asia or Korea, because “she’s heard” she has a big Asian following. I think Arianny has a big male following, period.

Changing the subject abruptly to most intense fighter stare downs she has witnessed, Arianny says that whenever someone faces off with Brock Lesnar it is always intense because he’s so big and intimidating. She also makes the comment that Brock makes her feel like a little ant.

Here is what Playboy.com currently has to say about Arianny’s upcoming pictorial:

Yes, it’s true: One of the hottest women to ever step foot in the Octagon will grace Playboy’s November cover, and appear in the Cyber Club where you can see her nude pictorial with online-only outtakes!

Playboy.com also has a section to enter your e-mail address so they can notify you immediately when her nude Playboy pics are available online. If you want to sign up for that go HERE.