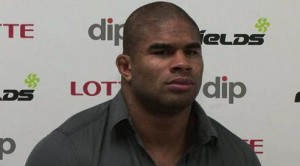 Alistair Overeem talks about advancing to the Final 8 with his spectacular stoppage of veteran Ben Edwards this weekend in the K-1 2010 World Grand Prix in Seoul, South Korea.

Overeem said he trained like an animal for the fight and was confident he could finish it in the first round, which he did. He also knew Edwards punched very hard and had to be careful of getting caught.

The lottery for the Final 8 fights will be tonight and will stream live online. This will determine who Overeem will fight in December.

Overeem says he only trains kickboxing when preparing for a K-1 bout and puts the MMA training aside during that time. Whatever he’s doing, it’s working, because he continues to win impressively both in K-1 and MMA.

His absolute destruction of Ben Edwards, a knockout specialist of the highest order, was nothing short of phenomenal. It’s even more impressive considering Overeem has had so few straight kickboxing matches and has spent the majority of his career in MMA.

If you haven’t seen the fight between Overeem and Edwards, you will want to watch that here: Alistair Overeem vs. Ben Edwards