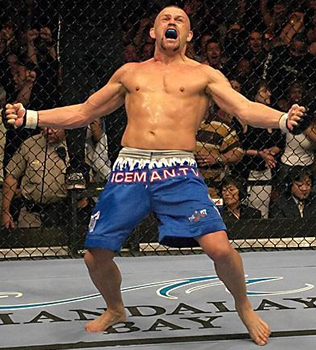 Although Chuck “The Iceman” Liddell (21-8) has lost five of his last six bouts and been knocked out in his last three, he is still not quite sure if he is ready to hang up the gloves. At 40-years-old, Liddell is still talking about possibly making a run for the title.

“It’s about how I feel and if I want to go back and make a run at a title and how far away that would be. And whatever I think is left in the tank. I’ve been doing PR stuff for the last couple months, and I’ll finally be home for the month. I’ll probably decide sometime in September, when I have time to relax.”

Liddell held the UFC light heavyweight title from April 2005 until May 2007. In his prime he was one of the most feared strikers on the planet and is still probably the most famous and recognizable mixed martial arts fighter in the world.

It has to be hard to let go something you were so good at and love so much. It’s a decision he is obviously grappling with.

“I don’t feel like there’s anything left to prove. I still love fighting, but there’s a lot that goes into it. Maybe it might be time. I’m just not sure yet.”

Whatever “The Iceman” decides to do, he will always be remembered as one of the most exciting fighters to ever step inside the cage. He always laid it on the line and wasn’t afraid to take a couple to give a couple. And for a long time when he would give a couple, he was the only one left standing.

Do you think it’s time for “The Iceman” to retire?

If Liddell does still want to fight and was allowed to by the UFC, who would you like to see him fight?

If he committed himself to training, could Liddell one day win the UFC light heavyweight title one more time?