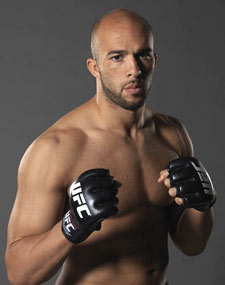 DENVER, Colo. — In his first fight since being released from the UFC back in March, Eliot “The Fire” Marshall (9-2) defeated UFC and Ultimate Fighter veteran Josh “Bring the Pain” Haynes (13-11) via unanimous decision in the “Ring of Fire 39: Summer Brawl 2” main event Friday night at the Fillmore Auditorium in Denver, Colo.

Marshall was the local favorite, representing Grudge Training Center with coaches Trevor Wittman and Greg Jackson in his corner. Many people were surprised at Marshall’s release from the UFC, as he only had one loss in the organization, a split decision defeat at the hands of Vladimir Matyushenko at UFC Live 1.

However, seeing his performance against Haynes maybe makes it just a little more understandable. Haynes, a journeyman, has always been known as a tough guy, but Marshall had about a six-inch height and quite a big size advantage. Yet he still could not put Haynes away and looked far from dominating.

Since exiting the UFC in 2007 Haynes’s career has been up and down. He was on a two fight win streak coming into the bout with Marshall, having defeated Sean Salmon in Oct. 2008 and Rafael del Real in Feb. 2009.  Haynes had not fought in a year-and-a-half which makes Marshall’s conservatism and inability to finish even more perplexing.

Marshall did admit in the post-fight interview that he still has a lot of work to do. Check out our full play-by-play of this and all the Ring of Fire 39 fights: “Ring of Fire 39: Summer Brawl 2” results, play-by-play.