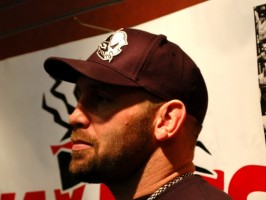 As Shane Carwin‘s title fight against Brock Lesnar at UFC 116 progressed through the first few minutes, it appeared Carwin was right on pace to keep with his quick finishes.

Although Lesnar was being attacked by one of, if not the heaviest puncher the sport has ever seen, he defended, kept active, survived Carwin’s initial storm, and even made it back to his feet before the first round ended.

Carwin had thrown 100 punches during the first round and for the first time in his career he was going into round two. From the spectators point of view, Carwin appeared to be totally gassed. However, in a blog post from Sunday, he says it was not his cardio:

The game plan last night was to be patient and let the fight come to you. When I had him in trouble the ref keep saying he was going to stop it and then towards the end of the 1st my body began to seize up. In between rounds I could not move my legs and had what felt like a whole body cramp. My cardio was fine but my body was not. What can you do? You have to stand up and face your opponent.

If it was not his cardio, it is possible he had an adrenaline dump. He was in the main event of what was being advertised as the UFC’s biggest fight in history and had just given everything he had. Although Carwin always appears cool and calm, it has to practically be impossible not to have some nerves going into a fight of that magnitude.

Whatever the problem, Carwin says he was not the same as the bell for round two rang out, his legs felt useless, and he knew he had to finish the fight as quickly as possible:

Heading into the second I knew I need to finish the fight or I was going to be in trouble. Much like the Champion he is I am sure Brock was thinking the same thing. I had zero take down defense as my legs were dead to me and the rest is as they say history.

Carwin as well as a lot of the fans were impressed with the way Lesnar carried himself after the victory. Even leading up to the fight, Lesnar seemed more humble after recovering from his illness.

Lesnar showed great heart during the fight. He is the first person on the planet who has survived Carwin’s punching power, and his winning by submission shows he is still progressing as a fighter. Many fans, as well as Carwin, have a new-found respect for Lesnar, not only for his fighting, but as a person. Carwin says he will learn from this loss and be back.

Brock was a good guy through this entire fight. He did not talk a bunch of smack and he fought like a warrior. He did what he needed to do to keep his belt and that is what being a Champion is all about. I am going to have to claw my way back to the top but I wouldn’t want it any other way. I know I belong with the very best; all I need to do is prove it again.

Losing is what happens on the way to winning. I will be back and better from the lessons learned in this fight.