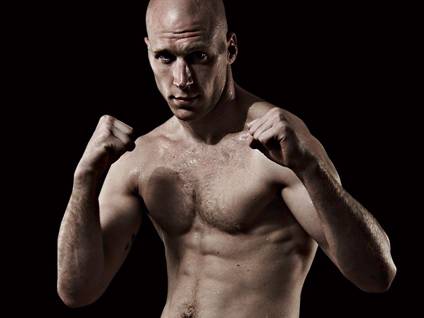 Thompson broke into the national MMA scene in October 2005 with a rear-naked choke victory over UFC veteran Josh Neer at Extreme Challenge 64. A rough matchup for any fighter, Thompson then defeated another tough guy in Keith Wisnewski at UFC 56 less than a month later.

With over 50 pro fights in just six years, Thompson is one of the more experienced fighters in the world. Prior to 2009, “The Goat” was riding a 22-2 streak as a welterweight, with wins over current UFC contender Paul “Semtex” Daley and current Bellator lightweight champion Eddie Alvarez.

Despite a gaudy record and a minuteman attitude that allows him to take any fight on any notice, Thompson was unable to find competition at 170 pounds and was forced to move to the middleweight division to take a tough fight with fast-rising prospect Tim Kennedy in StrikeForce.

His willingness to fight and an offer from a growing promotion in Shine prompted Thompson to sign on the dotted line: “Over three years I’d gone 22-2 at welterweight, and I couldn’t get a fight. It was really frustrating…if you look at my record, I had 50 fights in five years, and all of a sudden I’m going down to two fights in a year. I’m going out of my mind.”

Despite riding a two-fight losing streak, the well-rounded Thompson is still a force to be reckoned with: “I can submit you from the top, from the bottom…I’ve knocked out world-class strikers, and I think that’s one thing that sets me aside is just my well-roundedness.”

A quick rundown of Thompson’s resume and the names that it contains proves why he is one of the more respected fighters in the world. On top of the aforementioned victories over Daley, Alvarez, Neer, and Wisnewski, “The Goat” has defeated the likes of former Cage Rage contender Mark Weir, and UFC veterans Ansar Chalangov and Chris Wilson. The impressive veteran has also faced the likes of Bellator welterweight Dan Hornbuckle, StrikeForce Middleweight Champion Jake Shields, former UFC welterweight contender Karo Parisyan, “The Ultimate Fighter” season three runner-up Ed Herman, and UFC middleweight contender Yushin Okami.

Now setting his sights on the Shine roster, Thompson plans to make it back into the top ten in his weight class: “I want to be the number one ranked guy in Shine Fights, plain and simple.”

“Nick is a world-class fighter, and we’re extremely excited to feature him in our shows,” said Shine Fights matchmaker Ron Foster.

Thompson will fight in the Shine Welterweight division and a debut is expected in 2010.