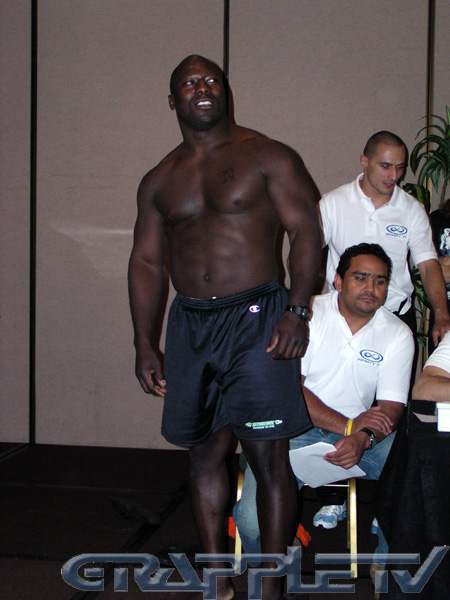 Speaking exclusively to ProMMAnow.com on Wednesday, Rhadi Ferguson,  Judo Olympic alternate for the U.S. in 2000, and an Olympian in 2004, announced he will be entering the world of professional mixed martial arts. Ferguson is also a black belt in Brazilian Jiu Jitsu under American Top Team’s Ricardo Liborio and an Abu Dhabi veteran. Also, if it is true that fighting is 90% mental, Ferguson’s PhD in education should give him a good handle on that aspect as well.

Although currently training at American Top Team and Fighters Alley in south Florida, Ferguson does not plan to limit himself. “I’ll train a little bit everywhere… I believe in getting the best training possible for me,” said Ferguson. “That means I will spend time training at American Top Team for sure. My friend, Dave Camarillo is out at AKA, I’ll probably go out there for a week or two. I’ll go see Lloyd Irvin for a week or two. I may go see Ed Clay for a week or two… I believe in creating positive relationships and a great network so you can train anywhere.”

If Ferguson’s physical and educational achievements were not already enough, he is also obviously blessed with good fighting genes. Case in point, he is the cousin of UFC fighter and world’s most famous former street fighter, Kimbo Slice (Kevin Ferguson). And like his cousin Kimbo who brought a whole new audience to MMA, Ferguson hopes to do the same. “I hope to bring in people from a different demographic. I’ll probably be the only PhD in the game,” he said.

Ferguson, who is being managed by Nashville MMA owner Ed Clay, is looking to have his pro MMA debut sometime after July. “I need some time to get myself in shape… I’m pretty rusty to say the least,” said Ferguson. When asked what he hoped to accomplish in mixed martial arts, the doctor simply said, “I want to win.”

Check out our exclusive interview with Rhadi Ferguson.