India based Mixed Martial Arts promotion, Super Fight League, have confirmed the fight card and headliner for their upcoming SFL 14 event as Xavier “Professor X” Foupa-Pokam (24-18) faces John Troyer (14-7) for the SFL middleweight championship. The event is set to take place in Mumbai, India, on March 29. 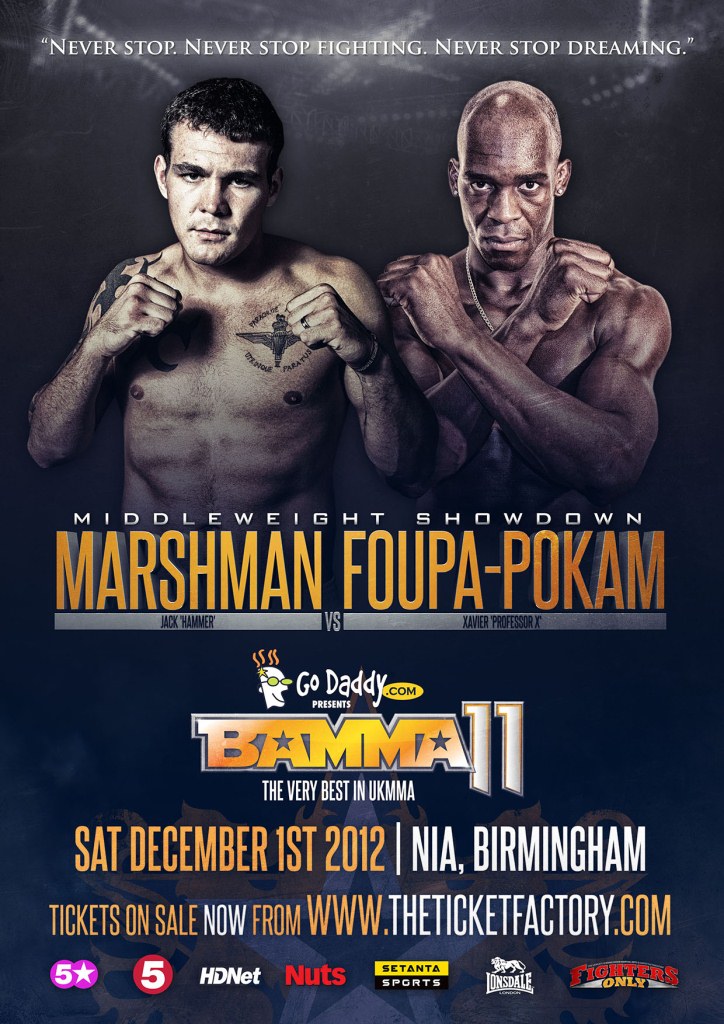 BAMMA 11 took place at the National Indoor Arena in Birmingham, England on Saturday. Xavier Foupa-Pokam a.k.a ‘Professor X’ battled his way to a decision victory over Jack Marshman.

The former no. 1 heavyweight in the world Fedor Emelianenko will return to action this Sunday, Nov. 20, as he takes on Abu Dhabi champion Jeff Monson.

Headliner Paul Daley and co-headliner Ricco Rodriguez both came in over weight at Friday’s weigh-ins for BAMMA 5. Daley’s fight with Yuya Shirai will now be a non-title fight. Here are the complete weigh-in results.

BAMMA 5 will feature Paul “Semtex” Daly vs. Yuya Shirai in the main event and Ricco Rodriguez vs. James McSweeney in the co-main event. “Professor X” Xavier Foupa-Pokam is also on the card.

Cage Rage veteran Xavier Foupa-Pokam, a.k.a. “Professor X,” made his UFC debut against Denis Kang at UFC 97. Unfortunately for Xavier, the first-time UFC jitters got the better of him and he lost the decision.

Not one to rest on his laurels, and ready to jump right back in there a month later to fill in for the injured James Irvin, Professor X was asked by the company to face Drew McFedries at UFC 98. It was his second chance to show UFC fans what he was made of.

This time the fight did not go to decision. McFedries caught the Professor with a punch early on, he was able to capitalize on it with a flurry, which in turn caused the ref to stop the fight at the 0:37 mark of the opening round. Subsequently, after two fights and one month, “Professor X” was released from the UFC.

After two disappointing losses in only two fights inside the Octagon, Xavier Foupa-Pokam has officially been released by the UFC.

PRO MMA (promma.info) has confirmed with Foupa-Pokam’s agent, Ken Pavia, that his client has indeed been cut from the UFC roster. “That is confirmed and accurate. We can rebuild him,” Pavia stated after being asked for confirmation of the release.

Foupa-Pokam, better known as “Professor X”, earned his spot in the UFC after amassing a 20-9 professional MMA record, with a seven fight win streak. The UFC had big expectations for the devastating middleweight striker from France, but those expectations were short lived.

On April 18, 2009 an ominous Xavier Foupa-Pokam entered the UFC cage for the first time and battled veteran Denis Kang to a decision. On May 23 Xavier Foupa-Pokam, better known as “Professor X”, will make his second appearance inside the Octagon as he takes on Drew McFedries at UFC 98 at the MGM Grand Garden Arena in Las Vegas, Nevada.

26-year-old Snake Team member “Professor X” is an extremely athletic 6’1″ middleweight from France; a Cage Rage veteran and muay-thai specialist who is also dangerous on the ground. He carries a professional MMA record of 20-9 with 11 (T)KOs and 7 submissions. Rarely will you see a “Professor X” fight go to decision. In 2007 he appeared on the History Channel’s “The Human Weapon” as a Savate instructor.

PRO MMA (promma.info) recently had the opportunity to speak with the Professor about a number of topics including his opinion of his UFC debut performance, his upcoming fight at UFC 98, the Snake Team, MMA in France, the origin of his nickname, the UFC Middleweight Champ, his future, and more. PRO MMA (promma.info) proudly presents the mysterious “Professor X.”