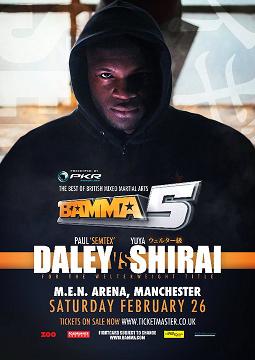 The event will stream LIVE in an online pay-per-view and feature UFC and Strikeforce veteran Paul “Semtex” Daley vs. Japanese Deep and M-1 veteran Yuya Shirai in the main event for the BAMMA welterweight title.

Paul Daley (26-9-2) is currently riding a three-fight win streak and is coming off a “knockout of the year” caliber performance over Scott “Hands of Steel” Smith at “Strikeforce: Henderson vs. Babalu 2” back in December.

Daley dropped Smith with a punch at just over the 2:00 mark of round one that caused Smith to fall face first into the canvas in what appeared to be slow motion. The scene prompted onlookers to question, “Which hurt more, Daley’s punch or Smith’s face hitting the canvas?”

Daley is known as one of MMA’s top strikers, but his opponent, Yuya Shirai (20-8) is a fighter capable of taking advantage of Daley’s Achilles’ heel, the ground game.

Shirai is a grappler and submission fighter who likes to grind it out. He is currently riding a five-fight win streak with his most recent victory being a unanimous decision over Shigetoshi Iwase at “DEEP – 50 Impact” in Oct. 2010.

Ricco “Suave” Rodriguez (45-11) will have his hands full with England’s James “The Hammer” McSweeney (4-6). While Sweeney is by no means a top tier fighter, he will still arguably be a tougher test for Rodriguez than the competition he has been used to fighting the past couple of years.

Rodriguez will look to continue his impressive 10-fight win streak, and this will be McSweeney’s first fight since getting cut from the UFC late last year.

McSweeney had decent success on The Ultimate Fighter season 10, defeating Wes Shivers in the elimination round and then choking out Matt Mitrione in the quarterfinals. Current UFC heavyweight contender Roy “Big Country” Nelson was the man who dispatched McSweeney in the semifinals before he moved on to defeat Brendan Schaub in the finals.

In his first official UFC bout, McSweeney scored a third round TKO over Darrill Schoonover in the TUF 10 Finale. However, he dropped his next two via TKO to Travis Browne and Fabio Maldanado before being released from the organization.

Rodriguez was last in action in November when he scored a unanimous decision over M-1 and KSW veteran Daniel Tabera (16-5) from Spain. Rodriguez has finished seven of his last 10 opponents and it will be interesting to see how he fares against the recent UFC cast-off.

The experience difference between these two makes it even more intriguing.

Fans can watch BAMMA 5 on www.bammatv.com on Feb. 26. The LIVE online pay-per-view will cost $10. Repeat on-demand screenings will cost $5 or you can pay $12 for the live streaming plus unlimited on-demand for seven days after the event.

The full BAMMA 5 fight card* is as follows:

For more information on this event and its fighters, including ticket info, go to the British Association of Mixed Martial Arts website at www.bamma.com.