Former UFC interim welterweight champion Colby Covington finally gets a shot at the undisputed championship on Saturday at UFC 245. Champ Kamaru Usman will try to stop the steam roller of takedowns and punches that is Covington. However, there is a lot more at stake when they close the cage door for their main event … Read more

Chuck Liddell is facing Tito Ortiz for a 3rd time in case you missed it. A little sarcasm there. The bout goes down on November 24th under the Golden Boy promotional banner and the build-up hype has started. Liddell spoke with the media ahead of the fight and thankfully we can share the video with you. Say what you want about Chuck but he’s a legend and pioneer in the sport. Check it out…

Yesterday it was “Money” Mayweather who was featured at the media day circus in Las Vegas. Today it will be his opponent “The Notorious” Conor McGregor who will talk with the media, no doubt filling everyone in on his side of the Pauli Malignaggi drama, and workout in front of the cameras. Be sure to tune in for the live stream beginning at around 6 p.m. ET/3 p.m. PT for all the action or catch the on-demand replay at your convenience.

Floyd Mayweather Jr. and Mayweather Promotions CEO Leonard Ellerbe took part in media day activities Thursday in Las Vegas. Ellerbe started with a media scrum with reporters and then Floyd came in for his own scrum and one-on-one interviews. After that the boxer known for “hard work and dedication” gave an open workout for all in attendance. You can watch the entire event below.

Mayweather and McGregor will square of on Aug. 26 on pay-per-view as the 40-year-old unbeaten boxer pits his 49-0 record against the UFC lightweight champion in what will be his pro boxing debut.

Floyd Mayweather was questioned at Thursday’s media day in Las Vegas if he felt he had to put Conor McGregor away on Aug. 26 for himself to consider it a win. The 40-year-old boxing legend will pit his 49-0 unbeaten record against the UFC champion in what will be the biggest combat sports event in … Read more

If Floyd Mayweather steps inside the ring with Conor McGregor on Aug. 26 and he finds out the Irishman is way overmatched and he is outclassing him, the unbeaten boxing legend hinted he may have to carry McGregor a bit to keep the fans entertained. He was asked about this exact scenario. “You got to … Read more

Ahead of her bantamweight title defense against Holly Holm at UFC 193, Ronda Rousey talks about the growing cost of fame, being a role model, the fear of failure, post-fight buffalo wings, why she won’t answer questions about her love life, the Road House remake, fighting on UFC 200, fighting in a cage vs. ring, … Read more 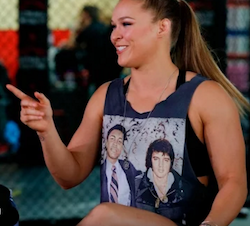 The undefeated Le, one of the most dynamic fighters in MMA, will enter the cage for the first time since relinquishing the STRIKEFORCE middleweight (185 pounds) title to concentrate on an acting career.  Le will face Scott “Hands Of Steel” Smith, a hard-hitting puncher and contestant on season four of Spike TV’s The Ultimate Fighter reality show, in the main event.

This is “DAY 3” of Matt Serra’s video blog leading up to his big fight against Matt Hughes at UFC 98 on May 23rd. It is media day for Matt Serra and viewers go along with Matt as a guest on The Opie & Anthony Show, Fox News’ Fight Game, Jason Ellis’ radio show and … Read more