WWE wrestler turned movie star Batista showed up unexpectedly at Smackdown 1000 last night and reunited with his former ‘Evolution’ stable mates. It was a happy reunion up until the point he reminded HHH of his failures. HHH reacted with visible frustration when Batista brought up the fact that the COO had never beaten him. Check it out…

Dave Meltzer of Wrestling Observer Radio is reporting a strong rumor that Ronda Rousey will be facing Nikki Bella in the main event of WWE’s all female pay per view they are calling Evolution. Early rumors were that she would be facing strong, technically skilled wrestlers like Charlotte, Sasha Banks, and a potential rematch against … Read more 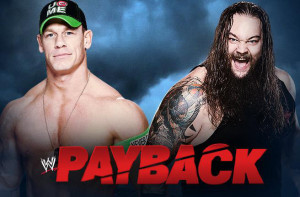 Here are the results for last night’s WWE special event PAYBACK During this PPV Daniel Bryan had a choice to give up his WWE Championship belt or Stephanie McMahon would fire Brie. Brie called Stephanie a bitch and quit. Mask vs. Hair Match: El Torito vs. Hornswoggle Winner: El Torito, Hornswaggle is now bald! WWE … Read more

I remember coming home one day with a plant for my mother. I had picked it off the side of a country road. Thinking that I would be considered great for my gesture, I presented this ditch weed to her at our home.

The California State Athletic Commission has released the official fighter payroll for “Strikeforce: Evolution”, which took place at the HP Pavilion on Dec. 19 in San Jose.

The king of the cage, the man taking home the most money for the night, despite being KTFO by Scott Smith was Cung Le. A sweet $150,000 paycheck should help ease Cung’s pain of suffering his first professional defeat.

On the other end of the spectrum was Daisuke Nakamura. This Japanese Pride and Dream veteran received only $200* (yes – two hundred dollars) for his unanimous decision loss to Justin Wilcox in their preliminary card bout.

Josh Thomson is a class act as he discusses his “fight of the night” performance with Gilbert Melendez at Strikeforce’s “Evolution” card Saturday night in San Jose. More interviews with Melendez, Mo, Smith, and Coker after the jump…

SAN JOSE, Calif. (Dec. 20, 2009) – No stranger to stirring comeback victories, Scott “Hands Of Steel” Smith rallied to knock out Cung Le, Gilbert Melendez regained the STRIKEFORCE lightweight world title in perhaps the Fight of the Year, and STRIKEFORCE newcomers “Jacare” Souza and “King Mo” Lawal triumphed impressively as STRIKEFORCE closed out an amazing year in spectacular fashion with an incredible fight card before 9,362 at HP Pavilion Saturday on SHOWTIME®.

After Melendez (17-2) of San Francisco earned a unanimous, five-round decision and avenged a loss to Josh Thomson (16-3), of San Jose, and Brazil’s Jacare (11-2) and King Mo (6-0), of Carlsbad, Calif., had  earlier scored first-round victories over Matt Lindland (21-7) of Oregon City, Ore., and Mike Whitehead, (24-7) of Las Vegas, respectively, Smith stormed back from the brink of defeat – again – to knock out the previously undefeated Le at 3:25 of the third round.

Here is “King Mo” Lawal’s Strikeforce debut against “Iron” Mike Whitehead. Prior to the fight, Whitehead didn’t seem to think much of Mo, and could not understand why so much attention was being paid to a guy with only five fights. All of Whitehead’s experience, extra weight, and training partners couldn’t help him once the … Read more

Mike Whitehead could not understand why King Mo has been getting all the hype. Now, do you think Whitehead understands “why the hype?”

The ultra-experienced Whitehead preferred to fight King Mo at heavyweight, and Mo, who said tonight he fights at “money weight,” gladly obliged the big man who out-weighed Mo by over 40 pounds.

Whitehead landed a few leg kicks in the fight but that was it. He threw some punches but all he hit was air. Mo landed some solid jabs and hooks before he landed a huge right hand that dropped Whitehead to the canvas, where he followed up with a few extra shots that knocked “Iron” Mike out cold at 3:08 of round one.